You can listen to this podcast via Apple Podcasts  or Spotify  or SoundCloud  or listen to it through the player below:

Back in 2008, Lorna Brown was the head of real estate restructuring at Royal Bank of Scotland while Ian Marcus OBE was chairman of the real estate investment banking group at Credit Suisse. Bill Hughes had just joined L&G as head of real assets in November 2007. There could not be three wiser sages to offer advice to the industry as it stares down the barrel of the most challenging start to a year for over a decade.

Brown is now chief executive of Birchwood, a new lending business set up with US institution WR Berkley. She warns against comparisons with the Global Financial Crisis (GFC). “Interest rates then were near zero,” she recalls. “We now have the other way round.”

Brown predicts a comparatively short shock, with interest rates moving to a more normal level of one to three percent. This will rattle the death knell for business models built solely on free money.

In spite of the current stalemate overtaking much of the sector, Brown remains bullish on the future of lending: “We are providers of capital. Whether that is structured as debt or equity, it’s really just about risk. It’s about finding borrowers and partners that are looking for additional capital at a different return from the equity target that they have. The idea is for us to bring together business plans to support them through this volatility.”

For Hughes, opportunity can be found in difficult conditions. L&G  had acted during the GFC to provide new sources of real estate finance to replace the distressed banks. Currently, the investor and owner-operator is beginning work in the US as Ancora L&G, which has provided an opportunity for L&G to define its own terms.

Ian Marcus OBE, senior advisor to Eastdil Secured  and now honorary professor at the University of Aberdeen, empathises with those relatively new to the sector for which the current volatility must be confusing.

The thing to remember, says Marcus, is that “there will always be a real estate market.”

“Who owns it, what we do with the real estate, and how we finance it may change,” Marcus continues, ”but the real estate market is there and we have to respond to what investors, occupiers and our customers want.”

Being responsive to the needs of investors, occupiers and customers means the industry will need to bring in skills beyond the conventional toolkit of a surveyor. “Broadly we’ve expanded the business by bringing in people with different skill-sets,” Hughes says. “It’s not about surveying, but it’s about the creative skills and data.”

Hughes highlights also the importance of sharing knowledge and experience during periods of market volatility: “If you’ve seen cycles before, you’ve got that knowledge in your head and you are in a position to interpret things and see opportunities that come out of that. If you haven’t seen this kind of thing before, it’s more important to be around people who have.”

Marcus agrees, recalling industry giant Jamie Ritblat’s observation: “How does a business have any sense of culture and community if everyone is disparate and separated out?” 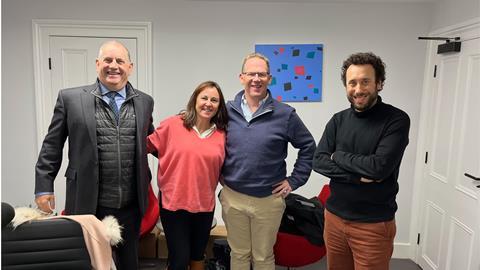 Marcus says the non-listed sector is getting a better share of the best talent: “I think there is less talent being attracted to the listed sector because of the constraints they operate in. You can’t reward your people in the same way and there is a drive of talent from the listed sector to the private sector. Why would you expose yourself once a quarter to being used and abused by analysts and constrained in terms of your reward?”

Looking to the future, guests see the industry continuing to broaden its purview in the built environment, such as in lab space, alongside sub-sectors of residential, logistics and infrastructure. Marcus observes: “We’ve gone from property to real estate to real assets through to infrastructure.”

Marcus says that there is also a role for real estate in responding to some structural challenges, such as an ageing population: “An area where Bill and I are getting into at present is… senior living,” since “the Government isn’t going to fund it and the demographics support it.”

At a broader level, Marcus says there’ll be a need, “to get used to repositioning, re-establishing, and regenerating our real estate,” so as to bring together work, life and play in city centres in rather different mixed-use configurations. Most importantly, there will be an emphasis on the delivery of outcomes, such as community health and wellbeing, moving the focus beyond the asset.

For Brown, long-term capital has a key role to play in this grand reconfiguration. “In the shorter-term there will be challenges to bringing forward new schemes,” he predicts, “not just development finance but cost-inflation and availability of materials.” These will all have an impact on the development cycle and what comes forward in the next 24 months. Long-term capital can think beyond that time horizon.

ESG also calls for a long-term approach. Marcus argues that relegation of ESG in the face of market volatility is non-negotiable, arguing “there is no way back.”

Hughes, a UK GBC Built Environment Climate Ambassador, argues that the industry must respond to the current sustained criticism of ESG by giving substance to ESG claims. Hughes believes that the introduction of the Sustainable Finance Disclosure Regulation (SFDR) and the actions of global regulators “will hold people’s feet to the fire.”

Brown agrees: “This is the difference now, there are quantifiable positions and people are focused on the data that allows you to track them.”

Marcus thinks the industry has come a long way on ESG. “Who was talking about climate change, sustainability, regeneration and organic foods around forty years ago?” he asks. “We all thought he was a rather strange person. That’s our new Monarch [HM King Charles III]. And now everything he talked about is absolutely mainstream… he’s a leader for much of what we now do as an industry.”

As Hughes observes, “We need to think about how we can have an impact on people. Then we can build and own real estate and infrastructure that have relevance.”

If the industry makes what it builds relevant, it can build rapport with society while delivering assets that are profitable and resilient for the future.