Government in Wales, at national and at local level, is in the driving seat when it comes to property development, whether it is for offices, retail or leisure facilities.

To pick just three examples: the Welsh government wants to speculatively build 90,000 sq ft of offices in Callaghan Square, Cardiff, despite two local developers - Rightacres and JR Smart - already being on site with similar office schemes. Meanwhile, in Newport, the council is paying for the development of Friars Walk, a 390,000 sq ft shopping centre that opens on 12 November, while in Swansea the council owns two prospective development sites of 36.74 acres in the city centre - but needs a development partner.

For now, much of the focus is on Swansea. At council-organised presentations in the city on 11 February and in London on 3 February, civic leaders promoted the sites of the demolished St David’s shopping centre and its own seafront Civic Centre offices and library as places that could be united by an aerial cycle and walkway - known as “a sky path”. It would be a bridge to cross Oystermouth Road, the 1960s highway that cuts off the city from the waterfront. 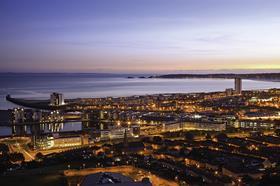 About 40 agents and developers in London and more than 100 in Swansea gave the council a respectful hearing. Few wished to dwell on the fact that behind the grandiose plans lurked the reality that for the past 20 years, the council has found and then lost developers who had failed to implement plans for a city centre shopping centre. Now, however, rather than rein in its ambitions, the council envisages even grander plans.

In 2012, the council bought and demolished the 30-year-old St David’s centre, but a year later failed to prevent Hammerson leaving as its partner after five unproductive years. Rather than concentrating on finding a new developer for the 16.8 acres now used as a car park, the council amalgamated it with the 19.94 acres on the seafront that would be available if the 1980s Civic Centre were demolished. However, the library and council workers would have to be relocated.

At the presentation, council leader Rob Stewart said he would accept a separate developer for each site. St David’s could be anchored by a cinema, a department store or a retailer that would occupy a major space unit, he said. The Civic Centre site that borders Swansea Bay could be the site for a new aquarium, as well as “innovative and creative solutions” to attract tourists. It was also suggested that Swansea University could occupy part of the site as part of its research and development facility.

However, some at the presentations say, off the record, that it is unrealistic of the council to expect big-name retailers to move into the city centre when many of these are trading on Swansea’s edge-of-town retail parks.

The council faced up to the city’s difficulties, outlining the problems in its presentation document. “Swansea is currently failing in both its retail and leisure offer with poorly configured retail space, lack of complementary leisure opportunities, dated environment and weak lead-tenant profile,” it stated.

Swansea’s only covered shopping centre, the 370,000 sq ft Quadrant, to the north-west of the St David’s site, is actually almost fully let, with newcomers like Superdry joining established tenants such as Debenhams. But the appearance could be misleading. Fashion retailer Saltrock opened last month, but landlord LaSalle Investment Management could only secure a deal for one year. If Saltrock decides to take a longer lease next year it will indicate to the council how strong Swansea is for new retailers.

Despite concerns, on 5 March, the council received developers’ first expressions of interest in the scheme, which left local leaders in an upbeat mood. While all previous attempts to develop retail space in the city centre had come from UK property companies, this time there was interest from French and Indian property developers.

“There’s been a lot of interest in our plans from companies based here in Wales, across the UK and abroad,” says Stewart. The council is hoping this initial interest will lead to development partners being appointed early next year.

Swansea University alumnus Sir Terry Matthews is chair of Swansea Bay City Region (although he may be better known as the founder of Newport’s Celtic Manor Hotel that gained worldwide publicity after being selected as the venue for last year’s Nato summit). Sir Terry believes the redevelopment of the civic centre would put the whole of west Wales on the economic map.

“Swansea has had its tough times, but it is coming out of it,” he says. “The civic centre has the potential to be made into something very special.”

If Swansea achieves something special it will be no less of an achievement than Newport’s council-funded renaissance. Like Swansea, Newport council had witnessed developers failing to build a shopping centre for two decades, while - again as in Swansea - retailers relocated out of town. The last developer to withdraw was a subsidiary of Modus Properties that went into administration in 2009. Two years later, the council’s development partner became the newly established Queensberry Real Estate.

On 12 November 2015, the first shoppers will enter Friars Walk in Newport, the 390,000 sq ft shopping centre on the banks of the River Usk. It is 65% let in terms of space and 63% in income. The developer, Paul Sargent, founder of Queensberry, estimates that on opening day 85%-90% of the shops and restaurants could be let, with that figure rising to 98% in the following six months.

Friars Walk commands prime zone-A rents of £110/sq ft for retail and of £30/sq ft for restaurants. This compares with zone-A rents in the city’s prime Commercial Street, which have halved to £55/sq ft in the past few years.

When asked whether Queensberry could repeat this achievement in Swansea, Sargent replies that it would be challenging. Yet, speaking before the deadline to show interest, Sargent did reveal he expected to tell the council that he wanted to be considered for the St David’s site. “Why not?” he quips. “After all, we know South Wales.” 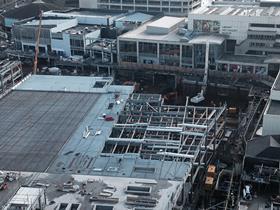 Sargent’s one piece of advice for Swansea, if it wants to emulate the retail turnaround of Newport, is to “be bold”. He praises Newport council for borrowing £90m directly to enable the start of construction of Friars Walk after Debenhams and Cineworld anchored the scheme. Queensberry must repay the money 18 months after opening.

“Newport council has creatively funded a gap in the market, which was in their long-term interests and they will see their money back,” he says. “Every council in the UK is nervous. But if you take big risks, you get big rewards.”

Queensberry is now assessing the options for repaying the council in May 2017, including refinancing the scheme to put in some of its own equity. Equally, it could sell Friars Walk outright.

Meanwhile, in Cardiff, contractor Balfour Beatty, could begin work on the £17m scheme to build offices in Callaghan Square this spring. But work could yet be delayed, as a private-sector purchaser has shown an interest in buying the five-acre development site that the Welsh government bought from MEPC in 2013 for £7.2m.

Negotiations now centre on whether the purchaser would buy the site that sits south of the city centre after the Welsh government took a lease on the 90,000 sq ft building, with the
new owner developing the rest of the site.

Land prices and office rents have increased sufficiently in the past two years for the government to make a profit. A source close to the Welsh government says that it bought the site at a time when developers were finding it difficult to borrow money. This could now be evidence of the public sector drawing back from property development. Yet Wales’s new devolved powers put the country in a strong position if it wants to continue as a developer.

From next month, Wales will keep all of its £960m business rates - 6.4% of its entire budget - when business rates are devolved to it, rather than being filtered through the UK government in Westminster. The Welsh government set up a business-rate panel to assess the changes, chaired by Chris Sutton, director of JLL and chairman of CBI Wales. Last month, the panel observed that there would be less money to spend in the first year, but noted: “Wales can expect to see its budget cut relatively less over the next few years of austerity than if business rates had not been devolved.” The panel also suggests that revenue from the business rates could be increased by levying tax on owners of undeveloped land.

To add to Wales’s increasing financial autonomy, in January, Sir Paul Williams, former head of NHS Wales, published a white paper suggesting that the 22 local authorities should be combined to form 12 enlarged authorities. The aim would be to improve public services and make them more accountable. The rates panel suggests that local authorities should be allowed to keep all their business rates. Cardiff alone would have benefitted by retaining £168m in 2013.

Under the proposals Cardiff would combine with the Vale of Glamorgan, Newport with Monmouthshire and Swansea remain unchanged.

But whatever the outcome of rates and boundary reforms, Welsh authorities will be in a strong position to continue taking a primary role in property development if they so choose.