Plenty of large office schemes have come out of the ground in Manchester in recent years, but not so many small ones - and certainly not so many with wellbeing at their heart. 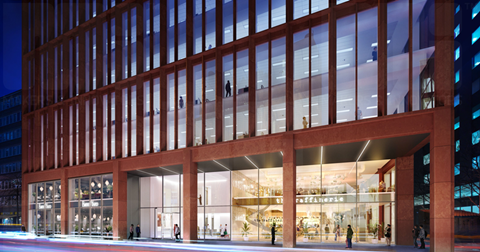 That is about to change. Worthington Properties is currently developing 125 Deansgate, a 116,000 sq ft grade-A office that is set to complete in April 2019, making it the first of the current projects under way to complete.

The size is not its only distinguishing factor. Unlike other new office schemes, which have tended to sit away from the city centre in areas such as Salford or Piccadilly, the 12-storey building is located right at the heart of the city, half way down Manchester’s Deansgate thoroughfare.

The developers are hoping that this return to the prime city core with a scheme that offers a combination of high-quality space and a location hard to come by lately will mark 125 Deansgate out from the crowd.

“The scheme will offer best-in-class office space in the highest-profile location in the city,” says James Evans, head of Savills’ Manchester office, which has been appointed to market the scheme. The fact that the building is slightly smaller than other recent grade-A developments in the city is expected to be a major selling point.

“The building is large but is not a 200,000 sq ft-plus giant,” says Evans. “From our discussions with occupiers, we hear concerns about being lost in very large offices in Manchester terms.”

The aim is to sign up two or three headline tenants. “We see the building as being home to two or maybe three occupiers, allowing them to benefit from exclusivity and a sense of identity and avoid feeling lost [in the space],” Evans says.

Discussions are under way with several potential occupiers, he says, but at this early stage no lettings have yet been signed.

At pains to incorporate wellbeing into the fabric of the scheme, the building’s health facilities are a cut above, says Evans.

“Significant work has gone into the design of the ancillary aspects of the building, notably changing areas, shower facilities and bicycle storage areas,” he says. “This is increasingly important with wellbeing firmly on the corporate agenda. We believe our offer in this regard will be unrivalled.”

Despite 125 Deansgate’s comparatively modest size, Worthington will be hoping that its attention to detail ensures interest from tenants is anything but.