Manufacturers of factory-built homes, such as Legal & General Modular Homes, possess the ability to address the UK’s historic shortfall in housing delivery while creating vital, high-quality employment opportunities for the UK economy. 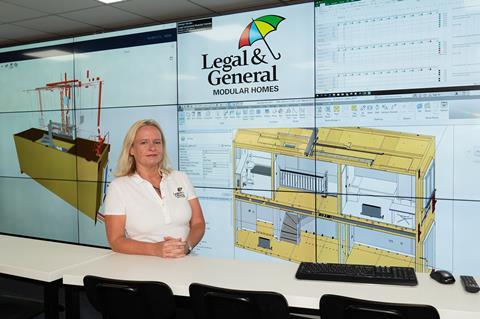 Covid-19 has brought housebuilding to a standstill. As Britain went into lockdown to mitigate the risks posed by the deadly outbreak, UK housebuilders downed tools on sites that collectively would deliver 250,000 homes.

Modular construction, where homes are built along a production line in a factory, will be crucial to ramping up housing delivery, Rosie Toogood, CEO of Legal & General Modular Homes, told Property Week on a PropCast.

You can listen to this podcast via Apple Podcasts or Spotify or SoundCloud or through the player below:

Rosie was hired by Legal & General in 2017 to head up the company’s modular construction subsidiary which operates out of a 550,000 sq. ft. factory in Leeds, capable of creating 3,500 homes a year.

Nigel Wilson, group CEO of the FTSE 100 insurer hired her from Rolls-Royce where she was a director for Rolls-Royce’s civil aerospace arm.

“We have the opportunity to grow an industry which is going to bring high-tech jobs in an economy that is going to need it,” Rosie said.

This will also be important in making construction a more appealing career path for the younger generations. Rosie added, “people are generally attracted to roles that have variety … and that give them the autonomy to add value.”

“A big part of what L&G does is invest to deliver long-term returns to match its pension liabilities. Housing provides a good opportunity to do that. Investment in housing is made in the context of investing in the UK economy for growth. At L&G, we see that the failure to invest in housing over time has created a drag on the UK economy. If people can’t own a home, or move around the country for different jobs, or be assured they’ll have a great home and community to live in no matter where they relocate to, then it creates a natural drag,” Rosie explains.

Rosie, who spent 25 years at Rolls-Royce, has high ambitions for Legal & General Modular Homes and for the sector as a whole.

“We all have huge ambitions to grow and there’s lots we can share. The positive thing is that we’re starting to work together to create an industry that the UK can be proud of.”

The Government also seems to share similar ambitions for the UK’s modular construction market. In 2019, the then-housing minister Esther McVey MP announced that the Government had appointed Mark Farmer, author of the hugely influential Modernise or Die report, as their champion for modern methods of construction as part of their drive to make the UK a world leader in modular homes within the next 10 years.

However, for the sector to really take off, Rosie points out that the media needs to become less squeamish about manufacturers making losses in the early years where research and development requires upfront, capital-intensive costs.

“There is always going to be a period of product investment. L&G spent the last three years developing designs and processes. That sequence is vital in growing an industry, improving quality and passing value onto customers.”

Back in July 2019, the Housing, Communities and Local Government Committee published a report warning that housebuilders must embrace modern methods of construction if the industry is to meet the Government’s 300,000 new homes a year target.

According to the report, homes built along production lines in factories can reduce energy consumption by 20-30 percent. This will be hugely important in helping the Government achieve net zero by 2050, given the fact that home heating is responsible for between a quarter and a third of the UK’s CO2 emissions.

Rosie explained how the design of her company’s homes helps achieve these savings. “Designs are taken to a level no traditional housebuilder would go to … drawings are developed to a level of details that make it crystal clear the level of standards and specifications. We get to a point where there is way less variability in the way our homes are constructed.”

She continued saying, “As a result, you get an improved level of air tightness and standard of quality.”

Build quality has plagued the housebuilding industry for quite some time, but as Rosie explains, modular construction is helping to address this.

“Our 150 factory floor workers have a responsibility for what they do and doing it to the right standard. We’re on a path to do something that is quite revolutionary in housebuilding, which is getting to zero defects. Our ambition is that as the modules move through the manufacturing process, we don’t pass any faults forward. So, when we get to the end, we don’t have any traditional snags.”

You can listen to this podcast via Apple Podcasts or Spotify or SoundCloud or through the player above. This podcast was produced by Blackstock Consulting founder Andrew Teacher and you can Tweet your views @andrewjteacher