The level of subletting activity in the central London office market has remained high this year as occupiers continue to relocate to prime space in a bid to attract talent, exclusive data from Gerald Eve shows.

The amount of office space sub-let by tenants climbed from 17.4% of the total London office market at the end of 2016 to a high of 24.3% in the first quarter of this year.

Although this fell to 22.4% in the third quarter, most of the declines in subletting levels in Canary Wharf, the City and Farringdon & Clerkenwell were offset by strong growth in the King’s Cross & Euston and Shoreditch areas.

Against a backdrop of low supply in King’s Cross & Euston, the proportion of space being sublet shot up from 18.7% at the beginning of the year to 54.7% in the third quarter. 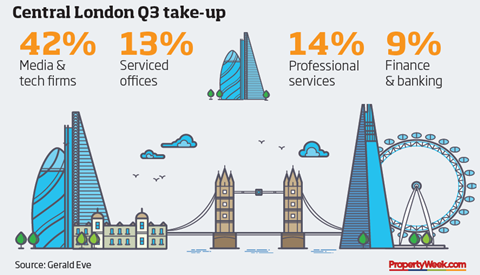 The growth in the number of occupiers offloading space has several drivers including consolidation, M&A activity and more efficient use of space. However, Gerald Eve partner Steve Johns says: “Ultimately there is a flight to quality and it is the specification and presentation of the space that is important.”

Alex Dunn, London office researcher at Gerald Eve, adds: “Occupiers are using real estate to attract the best talent. There’s just a real drive toward something unique in terms of architecture and space. Where we work is so much more of a pull factor than in the past.”

However, he warns, high levels of sublet space can undermine rental values. “It gives the illusion there’s a lot more space in the market, meaning there’s an option out there for prices less than what the landlord originally asked for,” he explains, adding that landlords need to improve their offering and have more flexible leases if they are to avoid this.

In the third quarter in central London, media and tech firms represented 42% of take-up and serviced offices 13%. By comparison, finance and banking represented 9%. “Tech and media firms place a premium on the newest and coolest buildings in the name of attracting and retaining talent,” says Johns.