Croydon’s new £1.4bn shopping centre development could generate annual turnover of as much as £745m when it opens in 2022, according to research undertaken by retail consultancy Harper Dennis Hobbs (HDH).

The centre, which is being brought forward by joint venture partners Westfield and Hammerson, received planning permission last year and HDH says that gravity modelling, which identifies retail catchment areas and potential shopper spend, shows it could boost Croydon’s overall retail spend by up to £2.7bn – or 53%.

The 500,000 sq ft scheme will be the largest redevelopment of its kind in the UK, and include more than 300 shops, restaurants, cafes, a new multi-screen cinema and a bowling alley. It will also provide 40,000 sq ft of offices and nearly 1,000 new homes. 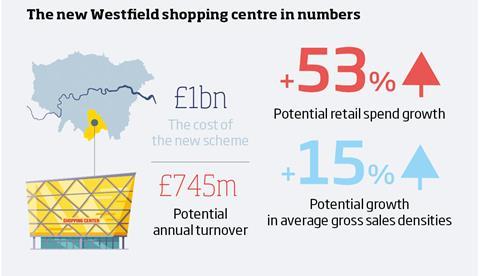 At present, the Whitgift and Centrale shopping centres generate 54% of the total turnover for Croydon town centre, but the new centre is

predicted to generate 75% of total town centre turnover. HDH’s data also shows that the average gross sales densities across the town will increase by 15%. Thanks to the addition of the new centre, Croydon’s retail catchment area is expected to expand significantly to the south east and south west into Bromley and Wimbledon.

However, although the impact of the new centre is likely to be positive, some areas will suffer, believes De Mello. “Inevitably, there will be losers as well as winners and the development will have a detrimental effect on some parts of the town,” he explains. “HDH’s research suggests that although overall gross sales density increases in Croydon, some areas will have to adapt and improve their offer to respond to the challenges posed by the new scheme.”

These issues aside, De Mello says Croydon is set to “hugely benefit” from the new centre, which he says will stimulate the local economy and make the town “south London’s regional shopping destination”. 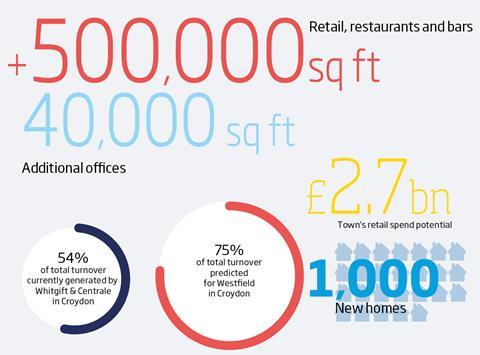