Huckletree, Farebrother and CO-RE bosses double down on workspace revival

In the latest episode of PropCast, Gabriela Hersham, David Hutton, and Alistair Subba Row speak to Blackstock Consulting’s Andrew Teacher about how the events of the last two years have caused a shift in priorities in the office sector. 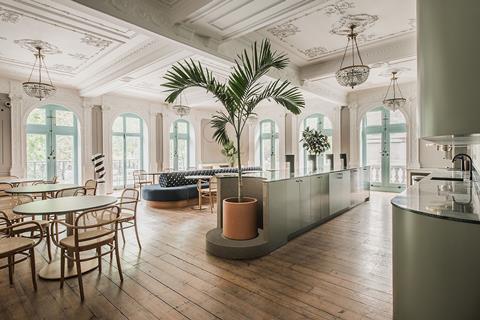 It’s been two years since Boris Johnson announced the order to work from home, and many column inches – penned by CEOs and gig workers alike – have since been dedicated to how the world of work is changing. There are few people better placed, however, to speak about how workplaces themselves have adapted than the three guests featured on the latest episode of PropCast.

Gabriela Hersham is co-founder and CEO of Huckletree, the UK’s leading independent flexible workspace provider. Creating inspiring spaces is in Hersham’s DNA, and her company has been ahead of the game when it comes to offering more than just desks and meeting rooms.

Rather, Huckletree curates ecosystems, where like-minded companies can actively collaborate, and fits out its spaces with the tools that enable its customers to do so. For instance PUBLIC Hall, the firm’s Westminster co-working space houses technological innovators working in the public sector in the iconic former headquarters of MI6 – and is decked out with quiet zones, reading rooms and a scenic terrace.

“Workers want creative spaces to brainstorm, open plan auditoriums, and meditation yurts where they can put technology down and really collaborate,” Hersham explains. “We’re accommodating that by building exciting spaces that entice people back in.”

The Huckletree co-founder is quick to dismiss those that might find the concept of a yurt bewildering. “If they’re sniggering at the need for wellness in the workplace, they’re out of date”, she retorts. “This is what people want today.”

Alistair Subba Row, whose 35 years in the office industry belie his forward-thinking approach, agrees. “Those putting these spaces into the workplace are doing financially better than those that don’t,” he concurs. Subba Row is executive chairman of Farebrother, a commercial real estate agency with a 220-year history that has been one of the leading office agents in London for decades.

Asked whether the rise of so-called ‘TWaTs’ – workers who come in only on a Tuesday, Wednesday and Thursday – necessarily reduces companies’ floorspace needs, Subba Row is sceptical. “We spent 10 years shoehorning people into as little space as possible,” he observes. “Now, people want more space, and they want bigger breakout areas, and comfy places away from the desk. When the upheaval has settled down, I suspect that net loss of floor area requirements will be closer to 15-20 percent.”

Another long-standing trend that has accelerated over the last two years is ESG, which is currently top of the agenda for developers, owners, investors and operators alike – a point that David Hutton is well aware of. As director of office developer CO-RE London, responsible for landmark projects such as ITV’s London studios and 120 Fleet Street, Hutton has his ear to the ground when it comes to understanding institutional investors’ thinking. 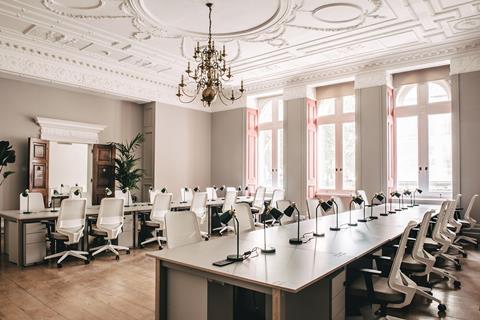 “Institutions are pushing for ESG,” he says, “they want metrics.” 120 Fleet Street, a 21-storey, 600,000 sq ft office development on the site of the former Daily Express newspaper headquarters, is in its demolition phase, having received planning consent last year. Meeting the sector’s renewed calls for greater sustainability, over 51 percent of the concrete in the building is being retained, as well as the basement and foundations.

Yet the call for greater sustainability and social responsibility goes beyond investors. “We’re being asked by both workers and companies how we’re contributing to the communities around us,” Hersham notes. “When the customers look to us as a brand, we’re not on the hook for BREEAM credentials. But they want to know what we’re doing on a day to day basis, such as reducing single use plastics, using vegetarian products, and offering recycling facilities.”

Enticing people back into the office clearly requires fresh thinking. Hersham sees the parallels with hospitality and hotels, where the spectacle of a building plays a much larger role. “People want to walk into a building that feels like the Ace Hotel,” Hersham observes. “Huckletree isn’t just thinking about the workspace, but managing that front of house activation, the F&B, events and programming for the whole building.”

Hersham’s comments point to a wider ‘operationalisation’ of the office sector – an integration of investment, development and operational function. This sort of joined-up thinking helps firms stay competitive when there are labour shortages. “The focus is on the war on talent,” Subba Row says. “That talent wants to work in a nice space with plenty of amenities, where it’s a joy to come to work.”

Hersham agrees that what may seem like extra costs – which are often reflected in service charges – in fact pay dividends. “It’s long been going that these kinds of offices increase productivity and bottom line,” she adds. “You look at Facebook and Google, and all the things they’ve been offering for so long – there’s a reason for it. They know you can’t build a great business in a silo. If you’re there and you’re collaborating together, the business impact is so strong – why would people not be happy to pay the service charge?”

Looking forward, Huckletree will be focusing on four key areas to measure and deliver social value – sustainability, community, innovation, and DEI (Diversity, Equality and Inclusion). While all the guests are positive about the winds of change in the sector, navigating the alphabet soup of measurement systems and accreditations is an ongoing challenge.

“There needs to be a consolidation that brings together the ‘kite-marks’ that a developer could look at,” Subba Row concludes.