If you constructed a Venn diagram representing architecture, investigative journalism, acoustic engineering, human rights law and psychology, you would find a tiny area of intersection in the middle. 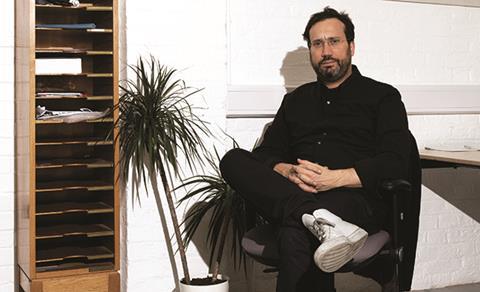 That space is occupied by Forensic Architecture, a research agency based at Goldsmiths, University of London - and at the centre of that space is Eyal Weizman.

The agency’s principal investigator is a serious academic and serial campaigner - and Forensic Architecture is the perfect home for his talents. The team of architects, scholars, filmmakers, designers, lawyers and scientists investigates criminal and human rights cases using spatial analysis to provide evidence that would not otherwise be available.

It works everywhere from Asia to South America - via the Middle East and Europe - and its findings have been used to confront everyone from those in genocidal regimes to individual policemen.

In a fascinating interview with Property Week, Weizman explains how he draws on property and architectural analysis to build spatial models and reconstruct exactly what happened.

The genesis of Forensic Architecture was Weizman’s experience growing up in Israel, where he campaigned against settlement building in occupied or disputed territories.

“It emerged in the struggle for human rights in Palestine - that was where the whole thing started,” he recalls.

“As an architect, I wrote one of the first reports trying to accuse Israeli architects of violations of human rights and international law. These were crimes committed on drawing boards in offices by Israeli architects and I thought we could indict them in The Hague. That was too ambitious, but the study very much implicated architects.”

We look at the bruised materiality of the buildings. We read buildings as sensors - they sense conflict. It’s not always about shells in the ruins. It’s the building as political sensor

Over time, the idea segued from pursuing architects to using architectural techniques to investigate human rights abuses. Cue the establishment of Forensic Architecture in 2011.

At the most basic level, the agency’s investigators gather material evidence - they are the “archaeologists of the present”, says Weizman. For instance, if a bomb has hit a building, they visit the scene and dig through the rubble.

“We look at the bruised materiality of the buildings,” he says. “In that sense, we read buildings as sensors - they sense conflict.

“It’s not always about shells in the ruins. It could be soot on the façade, a side that has been exposed to a particular emission. It’s the building as political sensor.”

Often, however, Forensic Architecture works in parts of the world where the authorities actively prevent independent assessments. In such situations, Weizman’s team relies on moving and still images captured by witnesses on social media. By applying architectural techniques to the images, they can reconstruct the scene, draw conclusions and work out who is to blame.

“To compose the relationship between the images and time and space, we need to build architectural models,” says Weizman. “In those models, we can sync up and locate those cameras in space and then navigate from one to the other in order to reconstruct what has taken place. You need to have the model; otherwise it’s just a thunderstorm of images without a beginning or an end.”

A case in point is Forensic Architecture’s work earlier this year in the Negev region of southern Israel. On 18 January, a group of Israeli policemen arrived at a Bedouin village, soon after which there was an incident that left one villager and one policeman dead.

The police claimed that the villager had driven aggressively at them and only then had they opened fire. However, a digital model of the incident constructed by Forensic Architecture proved this was not the case.

“They shot at the man who was just driving carefully in the area,” says Weizman. “They hit him in his right leg, he lost control of the vehicle and ran over a policeman. Then he bled to death for half an hour without anybody treating him.

“The police claimed that he was a terrorist, that he was Daesh, all this crap. The head of the Israeli police apologised for a wrong, misleading and inciting account. Now many people are claiming he has to resign.”

As well as gathering physical and digital evidence, Forensic Architecture increasingly uses memory to help reconstruct situations. In extreme circumstances, states attempt not just to restrict the movement of independent witnesses such as journalists and human rights organisations, but to shut down digital communication too. Then, testimony from individuals forms the best available information. 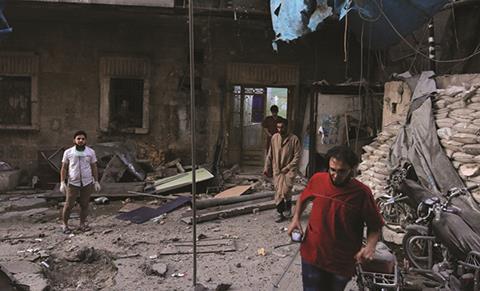 Medics inspect the damage outside a field hospital after an airstrike in the rebel-held al-Maadi neighbourhood of Aleppo -Source: Alamy/Reuters/Abdalrhman Ismail

“We use architecture to cross-reference the individual memories of individual witnesses and then corroborate them and build a model of the space so we can understand what probably happened,” says Weizman.

“The models also act as mnemonic devices - they act as a conduit into memory. By building models and engaging in the very mundane measurement of tiles or door handles or window details, sometimes repressed memories emerge.”

Drawing out such memories has to be done fastidiously yet sensitively. The buildings that come under such scrutiny by Forensic Architecture tend to be the likes of the Saydnaya prison in Syria, where people have suffered physically and psychologically.

“These are not simple memories,” says Weizman. “They are the single worst things that have happened to people - when they lost loved ones, were tortured, saw people being killed.

“Our memory operates by protecting us from these very painful moments. People remember very well what happened before and what happened after, but there is this big black hole in the middle.”

Such interviews are done in partnership with professional psychological support.”Witnesses who are willing to participate in such experiments slowly reconstruct a space,” explains Weizman. “You never know which detail it’s going to be - an ashtray, the patterns on a table cloth - but then, boom, the memory comes back and you can see the effect that memory has on a witness and how it consumes them. It’s a very dangerous moment and it’s why you have to do it with full support.”

In the case of the Saydnaya prison, witness testimony on what they had seen, heard and experienced enabled Forensic Architecture to construct a digital model of the facility. Former detainees described the cells and other areas of the prison, including stairwells, corridors, moving doors and windows. The witnesses added objects they remembered, from torture tools to blankets and furniture, to areas where they recalled them being used.

In addition to his work at Forensic Architecture, Eyal Weizman is an architect, professor of spatial and visual cultures and director of the Centre for Research Architecture at Goldsmiths, University of London. He is also a founding member of the architectural collective DAAR in Beit Sahour, Palestine.

His books include Mengele’s Skull, Forensic Architecture, The Least of All Possible Evils, Hollow Land and A Civilian Occupation. He has published numerous articles in journals and magazines.

He has worked with a variety of NGOs worldwide and was a member of the board of directors at human rights group B’Tselem.

The recollections sparked more memories as the model developed and the result is being used by Amnesty International to, in its words, urge Russia and the US “to use their global influence to ensure that independent monitors are allowed in to investigate conditions in Syria’s torture prisons”.

“We had five witnesses for the prison project and it was sufficient [to build the model],” says Weizman. “We are very clear about what we can and can’t do. If we had more time and there were more willing witnesses - they were all refugees in Turkey - we could do more. We released it because we were content that we had eliminated any inconsistencies and the model we had created was correct.”

The value of what the agency does means its services have plenty of takers. It receives some of its funding from human rights groups such as Amnesty International and takes on client work, although only if the project accords with its values.

We are like a private eye, but we will only take commissions from people we can fundamentally identify with

“We are like a private eye, but we will only take commissions from people whom we can fundamentally identify with,” says Weizman. “It’s when we see that we can add value; that there is an architectural element to a problem that we can solve.”

Important though it is, the work that Forensic Architecture does faces an uncertain future.

It relies on funding from the European Research Council: money that is likely to be lost after the UK’s exit from the EU. That would be a massive problem, not just for his agency but for cutting-edge research across the country.

“It’s money that is available to me as a British academic, but will not be available in the future because we have elected to leave the EU and that programme,” he says. “It’s probably the best research grant that exists in this area. The ERC allows us to experiment. It goes to the development of new techniques - we cannot use it for run-of-the-mill investigations.”

The threat to the development of new techniques is of particular concern to Weizman. “Different elements of what we do are being done by other people - remote sensing analysis, sound analysis, video analysis and so on, all of which are part of our toolbox,” says Weizman. “But that conjunction is [unique]. We work with filmmakers, investigative journalists, architects… it’s a very multi-disciplinary group that offers perspectives across the spectrum. We like to take on those cases we don’t know how to do. There is an intellectual ambition among our members.”

Ultimately, that ambition points in a single direction: establishing the truth. In the era of fake news and alternative facts, truth is a precious concept.

“There is something paradoxical and dangerous in saying that you need imagination to discover the truth,” he says.

“Imagination makes it sound like you’re going to create some kind of fake scenario. No. The truth is facts need to be produced - they don’t just lie there waiting to be picked up.

“They need to be made, composed, cross-referenced. Then they need to be presented. There is so much that depends on how you present it - your gestures, the tone of your voice.”

Whether it is through on-the-ground investigation, sourcing social media content or interviewing witnesses, the aim is simply to gather whatever information is available and use creativity to arrange it and paint as honest a picture as possible.

As Weizman puts it: “You need to learn how to interpret history from the trash and rubble it leaves behind.”