Bristol University will move into the heart of the city centre in an ambitious redevelopment designed to forge closer links with industry, prime the enterprise zone for growth and boost the fortunes of formerly neglected neighbourhoods nearby. 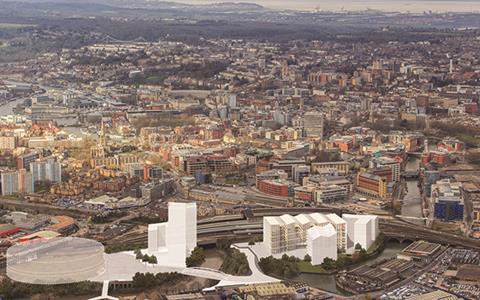 The £300m TQEC campus will focus on digital technologies

The £300m Temple Quarter Enterprise Campus (TQEC) will focus on digital technologies on the site of the old Royal Mail sorting office next to Bristol Temple Meads railway station. The site, which has been an eyesore for the past 20 years, blighting the main gateway into Bristol for incoming rail passengers, will begin to be cleared in 2019 in anticipation of this new seven-acre campus.

The move into the city centre will be a “game-changer” for both the university and the city, says Neil Bradshaw, Bristol University’s Temple Quarter (BUTQ) programme manager. “We could have grown on our existing facilities but we saw a valuable opportunity by placing it in the city.

“Bristol is increasingly being identified as a great place to live and do business. It is one of the best places to start a business and it is a great tech hub. We want to put the university back into the centre of this.”

The site is right in the heart of the enterprise zone and a cluster of technology businesses and the aim is to create a home of digital excellence, innovation, education and industry that will catalyse the growth of a new quarter, Temple Meads East, where people can work, study, live and enjoy leisure time.

Co-locating the university’s engineering, technology and social science disciplines on the campus will promote valuable new cross-disciplinary research and the many postgraduates on site will be encouraged to foster links with industry, helping to create a new generation of entrepreneurs and ‘intrapreneurs’, says Bradshaw. 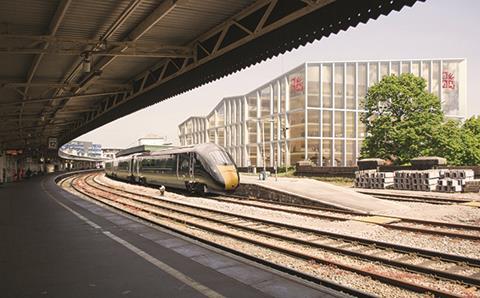 “It’s all about helping develop the engineer of the future. Digital technology is changing the roles of these people and there is an opportunity to take the lead in this area.”

The university already runs a successful start-up incubator at nearby Engine Shed, but it has broader plans than simply incubating new businesses. “We are pushing the early-stage start-up agenda, but we will have failed if that’s all it achieves,” Bradshaw says.

“Bristol has a significant digital, corporate presence and we are getting a lot of interest from companies that are talking to us about co-locating nearby. There is an inward investment agenda here. We’ve seen the likes of Huawei and Cray basing themselves in the city over the past few years because of this cluster.”

This should help drive new office development at scale in the surrounding area, as well as new housing, in what has been a relatively deprived neighbourhood, says Gordon Isgrove, regional senior director at GVA.

“The site has been such a monstrosity on our gateway for so long and this changes the whole complexion of the development that can come forward now. It is fantastic, one of the biggest game-changers for the city centre in a long time.

“The regeneration ripple will be significant. It is going to draw the city centre closer to one of the major transport hubs and enable the city centre to expand beyond the boundaries that were previously containing it.”

St Phillips, the predominantly light industrial area, should also benefit, says Paul Baker, director at JLL in Bristol. “The university’s plans will be a catalyst for the regeneration of the area immediately to the south of the station, where lower-rise buildings could be replaced with higher-density new development to include a mix of workspace and much-needed new housing.

The university’s plans will be a catalyst for the regeneration of the area to the south of the station - Paul Baker, JLL

“The campus will also be an excellent complement to the already thriving Temple Meads area, which is filling up fast. HMRC has committed to a new 100,000 sq ft office building and Legal & General has acquired two sites to develop around 300 homes for the build-to-rent sector.

“In addition, Royal London is about to start development of a new hotel and 80,000 sq ft of offices aimed at growing businesses in the technology, media and telecommunications sector, which are looking to move from incubator space, such as Engine Shed. Engine Shed itself is being expanded due to its success, with the development of Engine Shed 2 over 40,000 sq ft of accommodation on the George and Railway site opposite.”

Areas including Bedminster and Windmill Hill are also set to benefit, says Isgrove. “We are already seeing student developers looking in those areas now, which had never been the case before.”

Nearby Temple Quay will also get a boost, he adds. “At the moment, it dies down after office hours and the arrival of the university offers the opportunity to generate a bit of an evening economy there.”

The final part of the jigsaw will be the proposed 12,000-capacity arena on the neighbouring site owned by the council, which is working with building contractor Buckingham to establish a target cost for the arena. The council’s cabinet is expected to consider the overall business case around the end of the year. 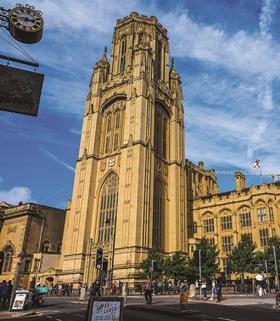 Bristol is known as one of the world’s great civic universities -Source: Shutterstock/Claudio Divizia

The two projects are separate, but some joint planning and preparation work is already complete, including improved pedestrian and cycle routes from the station and a new bridge to connect Temple Meads station with Temple Meads East.

Getting the most from the campus development will also require some creative planning and development to overcome challenges with the site, not least through the creation of better links with the grade I-listed railway station.

“You have to break down the barrier of the railway line and the wall that currently exists,” says Isgrove. “The station needs to open up into this site but it’s difficult to just punch holes in it.”

Options to open up station access to the campus and access through, or under, the station are being considered and costed in concert with Network Rail, with the aim of creating a site that is ‘porous’ to the city, says Bradshaw. “It must be part of the city, not closed off from it.”

The masterplanning phase is drawing to an end, the project should be submitted for planning to the council this month and the university is in the process of appointing a design team for the concept phase.

With the campus due to open in time for the 2021-22 academic year, if all goes to plan, this rare opportunity will help Bristol retain its reputation as one of the world’s great civic universities.