Is Amazon set to Go after UK food & drink market?

A message to the UK grocery multiples: be afraid, be very afraid – Amazon is gunning for your food and drink customers. 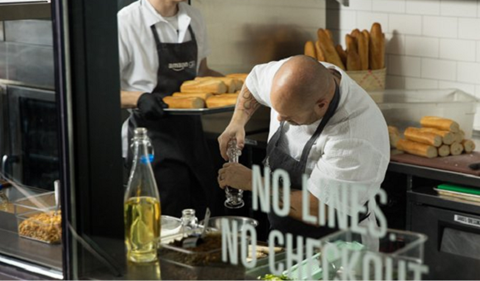 Earlier this week the online retail behemoth unveiled plans for Amazon Go (see a video of the store in action below) – a 1,800 sq ft checkout free store that uses Amazon’s ‘Just Walk Out’ technology.

Shoppers simply use the Amazon Go app to access the store, take the products off the shelf that they want and then leave. There are no lengthy queues at the checkouts to navigate because there are no checkouts. The store automatically detects when a product is taken (or returned) from the shelf and keeps tabs on the cost of the shopping in a ‘virtual cart’. After leaving the store with your goods the company charges your Amazon account and sends you a receipt.

At the moment the world’s first Amazon Go store in Seattle is only open to Amazon employees during its beta phase. The company intends to open the store to the public in early 2017 and then presumably – once proof of concept has been achieved and all of the kinks have been ironed out – it will start to roll out Amazon Go globally.

It’s probably going to be a few years before we start to see Amazon Go stores in the UK – it took the online retailer a while to launch its Amazon Fresh grocery delivery service in the UK after its initial roll out in the US and it followed a similar timeline with its ‘Dash’ buttons that allow consumers to order household essentials at the push of an ‘internet of things’ button.

That’s not to say that Amazon Go wouldn’t face challenges from the nation’s supermarket chains and indeed the discounters when it eventually lands in the UK. The creation of a network of bricks and mortar convenience stores takes time and a vast amount of resources – particularly financial resources. Which is where it becomes interesting.

A few property and grocery industry experts have suggested in recent months that Amazon may make a play for a rival grocery operator so that it can scale up its operation overnight. It’s long been suggested that Ocado would be a natural bedfellow for Amazon given its expertise in logistics, online grocery sales and home delivery.

However, the more interesting play would be the acquisition of Morrisons. When Amazon announced earlier this year that it was embarking on a wholesale supply deal with the supermarket group, which would make Morrisons products available to Amazon customers, it raised a few eyebrows – and concerns about the future of Ocado, which has struggled to generate profits since it launched. 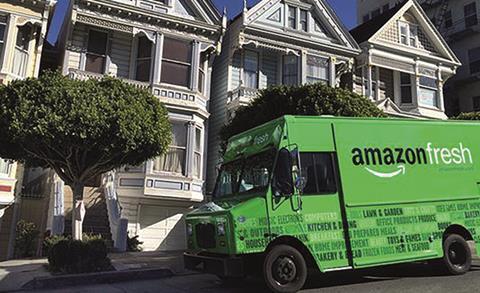 This relationship was further cemented last month when a new service called ‘Morrisons at Amazon’ launched, which allowed Amazon Prime customers in selected postcodes in London and Hertfordshire to do a full Morrisons shop online via the Prime Now app and then either pick up their orders from their local store on the same day, or get them delivered on the same day, either within one hour for £6.99 or in a two hour slot for free.

On announcing the deal Morrisons CEO David Potts said: “As food maker and shopkeeper, we have unique skills to help build a broader new Morrisons through capital light growth. ‘Morrisons at Amazon’ is another exciting joint opportunity and makes Morrisons good quality, great value-for-money products available to even more customers.”

Crucially it also makes Morrisons’ own label products – many of which it manufactures itself, unlike its rivals – available to Amazon customers. This allows the online retailer, which until now has only been able to stock branded goods, to compete with the own label ranges of Tesco and Sainsbury’s. This isn’t the only tie-up between the two retailers – Amazon Lockers can be found in a number of Morrisons stores. So given the existing close ties between the two companies is it inconceivable that the online retail giant could one day snap up Morrisons?

A month ago if you posed that same question people would rightly respond: what will Amazon do with all of those superstores? Shutter them and take the financial hit? The roll out of Amazon Go across the UK would partly addresses that problem, but how does a circa 1,800 sq ft checkout free convenience store fill a superstore space?

Well for starters those Amazon Lockers could become a fully manned Amazon click and collect point for general merchandise and for grocery sales. Amazon might even carry a small range of its best-selling general merchandise continuously in stock so that customers can make impulse purchase from a dedicated counter – think Sainsbury’s plan to introduce Argos counters to its stores.

The surplus space could also be used as small distribution hubs – ‘dark stores’ within a store – to fulfil Amazon Fresh orders.

In addition, these stores could also become those small, but hard to find logistics hubs in the centre of, or on the edge of, urban areas that online retailers like Amazon are desperately searching for so that they can overcome issues surrounding last mile delivery.

This new store network would allow Amazon to roll out its Prime Now deliveries within an hour across the UK. The stores could even become launch pads for Amazon’s more fantastical idea of introducing home deliveries by drones.

Of course Amazon wouldn’t want every store, but Morrisons has a healthy percentage of stores in town centres or within walking distance, that would allow it to cater for the UK’s growing demand for convenience shopping.

Only time will tell whether or not a deal of this nature will happen. Potts is doing a good job of turning around the grocery retailer’s fortunes so some might argue that it doesn’t need to sell. But if Amazon comes calling with a hefty offer would shareholders of the UK’s fourth largest supermarket turn down the opportunity to cash out with a healthy profit?