Has anyone else noticed there is something strange going on with the Cannes beach restaurants? Mystified by the profusion of building construction permits outside the familiar beachside haunts, I did a little research and came across a Hollywood Reporter piece last summer headlined ‘Cannes Construction Leads to Chaos on the Croisette’ about the possible impact on the annual Cannes film festival. 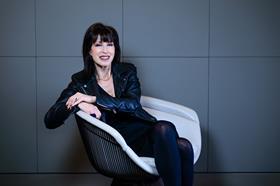 It seems the mayor of Cannes’ ambitious plans to transform the town into a high-end tourist destination are disrupting local business. Many of the beach restaurants we have come to rely on over 30 years of Mipim have either disappeared or are being reconstructed as more upmarket operations in an effort to upgrade Cannes to compete with other international playgrounds for the rich. It remains to be seen how this gentrification will affect Mipim-goers who are already bridling at rocketing hotel and restaurant prices.

Notwithstanding the construction programme, we managed to find a restaurant that was open and my regular first-day Mipim beach lunch with Liz Peace and Pat Brown took place very much as usual. That was despite the gale-force winds that dashed glasses and other untethered items to the ground and meant that sun umbrellas couldn’t be used as they would have been blown over. It turns out that we were the lucky ones as stories began to unfold of extreme turbulence, delays and aborted landings as flights struggled to land in Nice in the unusually high winds. 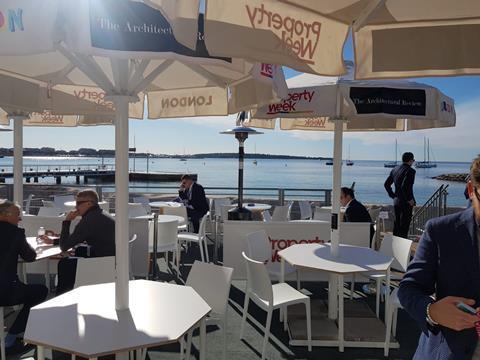 Popping into the Mipim News office for a pre-event interview was an interesting experience. The day before Mipim is due to start, the Palais is a hive of frenetic activity with stands still being constructed. It never looks as if the exhibition will be ready by the next day but, barring storms that did away with Manchester’s beachside stand last year, it will no doubt be ready for action.

It’s great to see so many of our UK cities out in force flying the flag and with London, Scotland, the West Midlands and the UK government lined up (alongside Egypt) each with their own branded pavilions. I took a peek around the London Stand and it has been reconfigured this year with an enclosed stage area. Also I think I noticed proper steps giving access to the stand for the first time – a great improvement on the rickety affair on which I have always wrecked my heels. On the subject of heels, I am following Tom Bloxham’s Mipim tip to dress informally and while it won’t be sandals for me, it may well be trainers. Watching the kids travelling up the Croisette at speed in their wheeled trainers with flashing lights, I wonder: don’t they make them for adults?

A useful first day at Mipim was concluded by our traditional Monday night dinner gathering at Le Maschou in the old quarter hosted by Harvey Soning of James Andrew International and Jace Tyrrell of New West End Company. There was loads of lively conversation around our plans and aspirations for Mipim 2019, great food and company. The 30th anniversary of the event promises to be a vintage year, once the wind calms down. I’m looking forward to the madness beginning tomorrow as I attempt to get to numerous simultaneous events while also chairing a proptech panel in the UK government pavilion. Bring on the wheeled trainers!