Brexit is not about to dull London’s edge

Despite the threats posed by Brexit, London remains one of the most competitive global cities to do business in, according to Savills’ latest European Cities report. 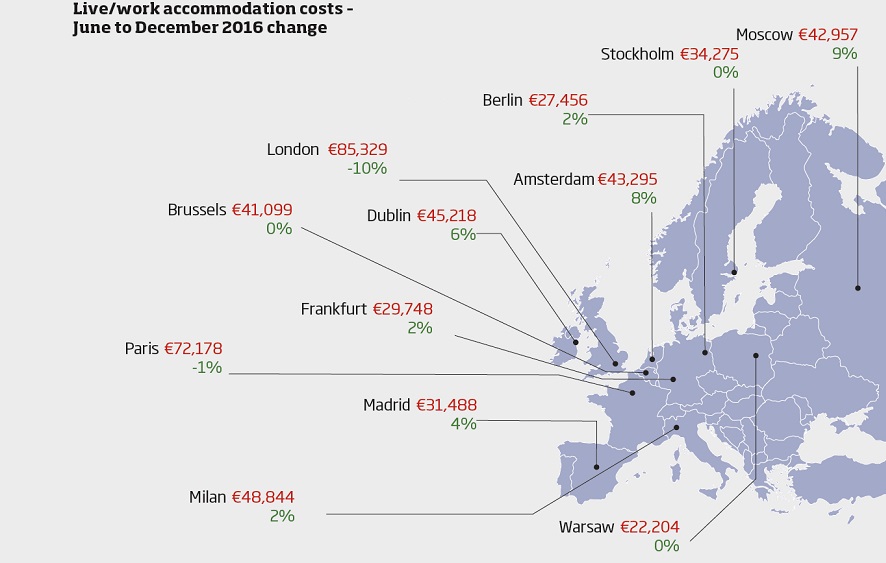 Since the Brexit vote, there has been speculation about a potential exodus of big corporations and multinational companies from the UK.

However, although London boasts the highest occupation costs of the 12 cities analysed, these have fallen 10% over the past year, says the report.

It also notes that the UK boasts a corporate tax rate of 20% – the lowest in Europe after Ireland – and social security liability of 13.8%, well below the 50.3% European average corporate tax bill. Moreover, investment volumes last year were the highest in Europe at €26.5bn (£23bn), compared with €21.5bn in Paris and €8.9bn in Berlin.

Savills says it did not believe that another city would supplant London as Europe’s main financial hub, although some financial institutions would relocate parts of their business to other cities.

“Taking all the factors of quality, cost and supply into consideration, it is likely that a dispersal of financial functions across Europe will continue,” says Yolande Barnes, head of world research at Savills. “It is unlikely we will see all functions so concentrated in one city again.”

The research cites five cities that possess attributes similarly attractive to occupiers: Amsterdam for its international environment and its cultural offer, Dublin for the English language, Madrid for its global scale, Frankfurt because of the presence of the European Central Bank and Paris for its worldwide reputation. It adds that in terms of job creation, the disruptive information, communication and tech sectors are becoming increasingly important and are growing at a faster rate than conventional finance and business services.

The creative districts of Old Street, Shoreditch and Farringdon, for instance, are migrating south into territory formerly dominated by banking and finance, it notes.

Barnes adds that falling occupier costs are helping to maintain the city’s attraction. “London is at the forefront of the property cycle and it’s now declining slightly. From an occupier’s point of view, that is a good thing, not only because the cost is getting lower, but also because the prospect of it rising rapidly in the future is minimal and there is more certainty about it,” she says.

The report predicts that London will retain its status as the most attractive European city for the finance sector. It points out that it will take several years for a financial cluster of a similar scale to London’s to form.

Some potential contenders will be impeded by space limitations, adds Savills, citing its separate briefing note on European offices. The note says that supply of quality, large-scale offices has dried up over the past few years and that occupiers are struggling to find the right accommodation.

However, it predicts that the development pipeline in major European cities will increase by 8% this year and 10% in 2018. Although in the medium term, this is likely to put downward pressure on rents, in the short term Savills says it expects landlords to push for higher asking prices for the best locations – potentially providing another disincentive to relocate from the UK.

“Most European cities are in, or approaching, autumn in rental growth terms. Some, like London, Paris, Frankfurt and Stockholm, have stabilised after recent growth. Others, like Amsterdam, Berlin and Dublin, are slightly later in the property cycle and will see some more rent rises and are also likely to see more investment and development activity in the next year,” says Barnes. “But I’d be surprised to see any large-scale and dramatic relocations from London to another European city.”