For the first time in recent years, take-up of office space in Newcastle city centre almost equalled take-up on out-of-town developments, according to a consortium of North East-based chartered surveyors.

“Last year ended with a return to positive enquiries, which bodes well for 2017, notwithstanding concerns regarding dwindling stock and a limited development pipeline,” says Tony Wordsworth, director and head of offices at GVA.

There were slightly fewer recorded lettings in the city centre - 21 compared with 26 out of town in the final quarter of 2016. However, in terms of square footage, the average city centre letting was 4,701 sq ft, exceeding the out-of-town average of 3,572 sq ft. And overall, city centre deals for the quarter totalled 98,733 sq ft, compared with 82,447 sq ft let out of town.

The largest city centre lettings were the 19,543 sq ft letting to Gateshead Council at Baltic Business Park and the 12,875 sq ft letting to Regus at Cale Cross House, Newcastle Quayside. Out of town, the largest letting was a confidential 26,000 sq ft deal at Weardale House, Washington.

The number of lettings in Newcastle city centre has pushed prime rents up to £21.50-£22.50/sq ft. “I believe the figures show the market to be in good heart, with lettings to remain in the average 5,000 sq ft range in the city centre, as expected,” says Chris Pearson, partner at Gavin Black & Partners.

“What is surprising is the fall in the average size of out-of-town take-up. The last quarter was the poorest quarter of the year - this may be some sort of post-Brexit bubble; we’ll never know. However, this does mean that there is a good choice of prime grade-A space [out of town], while currently there is no supply of new grade-A space in the city centre. Overall it’s an encouraging picture moving forward.”

Tony Hordon, a partner in the office agency and development team at Cushman & Wakefield and head of the firm’s Newcastle office, says that even taking into account the EU referendum result, the North East remains a very attractive location for offices.

The formation of the joint venture vehicle between Newcastle City Council, Legal & General and Newcastle University, announced in June last year, will ensure the delivery of a 100,000 sq ft speculative office building site at Science Central in mid-2017, he points out. A second building of a similar size, and included as part of the agreement, is expected to follow shortly after the delivery of the first building. 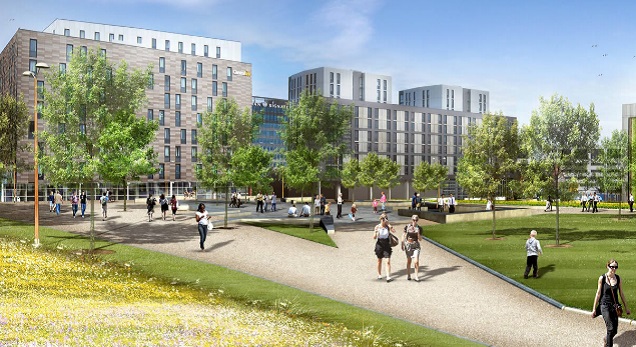 Plans for the £65m first phase of Newcastle Science Central

“This is excellent news,” Hordon says. “It allows the city and the region to compete with other cities for those occupiers considering northshoring or onshoring, which is likely to represent a continuing theme in the occupational markets as the south becomes increasingly expensive in terms of talent and occupational costs.”

Buoyed by an encouraging 2016, Newcastle’s office professionals are positive about the year ahead. While most parts of the country are concerned about the possible fallout from the Brexit vote, the North East believes it could actually benefit from the referendum result.