Take-up increased 6% on the previous quarter, making it the best quarter since Gerald Eve began collating data on the market for industrial properties of 500,000 sq ft-plus in 2005.

Demand from online and discount retailers was particularly high. Amazon led the way last year by committing to 1.4m sq ft during the fourth quarter, bringing its total take-up for the year to 8.5m sq ft – nearly 17% of all lettings.

Discount food retailers were also actively acquiring new space to serve their growing store estates. For example, Lidl signed for about 1.5m sq ft in the final quarter of 2016. 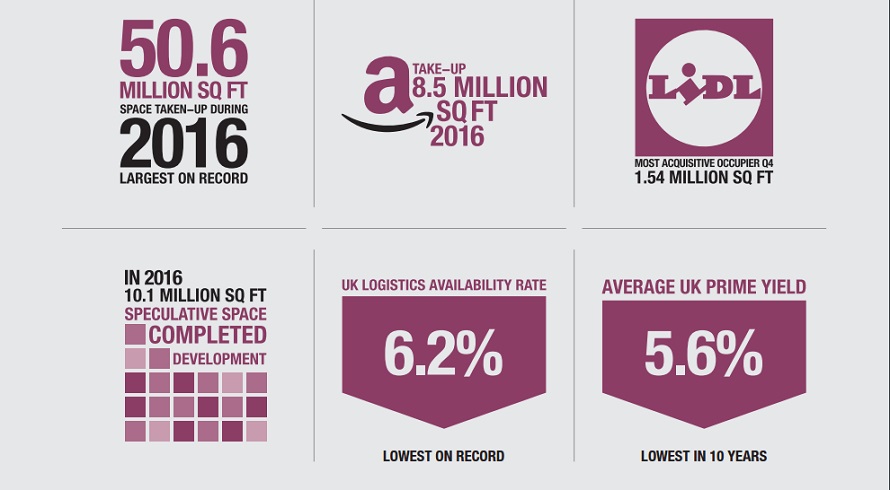 Despite a 50% quarter-on-quarter increase in development completions during the fourth quarter to 7m sq ft, the high number of lettings in the period meant that the availability rate fell to 6.2%, the lowest level on record.

Gerald Eve expects the market to remain robust this year. “Compared with the previous cycle, speculative development was more targeted and measured, with the market therefore better placed to weather any potential downturn caused by uncertainty surrounding the UK’s exit from the EU,” says partner Richard Ludlow.

The strength of the occupational market has also made industrial one of the most sought-after commercial property sectors for investors.

In the fourth quarter, the average UK prime yield fell to 5.6%, the lowest in 10 years, from 5.83% in the previous three months.

John Rodgers, partner at Gerald Eve, said: “Investors remain buoyed by the compelling occupational performance underpinning the sector, namely the continued strong demand allied to a current lack of supply and a development pipeline that remains limited in historic terms.”