Developers urgently need to deliver new incubator and accelerator space in the UK’s regional cities if there is to be any chance of stemming the regional brain drain, warns Savills in its latest Skills, Talent and Labour Mobility report.

With the exceptions of Manchester and Belfast, where the graduate retention rates are 51% and 50% respectively, regional cities struggle to retain graduate talent, according to the report. By contrast, London retains 77% of its new graduates.

The retention problems they face can partly be blamed on a shortage of accelerator space, says Savills, noting that UK regional cities provide fewer incubators and accelerators per 1,000 businesses than London or Scotland – the latter having benefited from funding from Scottish Enterprise.

“Accelerators base their business model on equity from start-ups, with a strong emphasis on growth over a fixed-duration programme, usually around six months. In order to retain home-grown companies that are looking to scale up, the regional cities must increase accelerator provision.”

Once these start-ups mature, they should also be encouraged to move on to more conventional office space to free up accelerator space for newcomers, believes Barnes.

Offering subsidised rents on incubator or accelerator space for the first two years and then increasing rents after that would ensure businesses move on to conventional space more quickly, he adds.

The report also explores the economics of ‘northshoring’. The argument for relocating from London to other cities, particularly in the north, has become even more compelling for businesses, according to Savills. It estimates that businesses save on average around £10,000 in staffing costs and £10,000 in property costs per employee per year by relocating from central London. 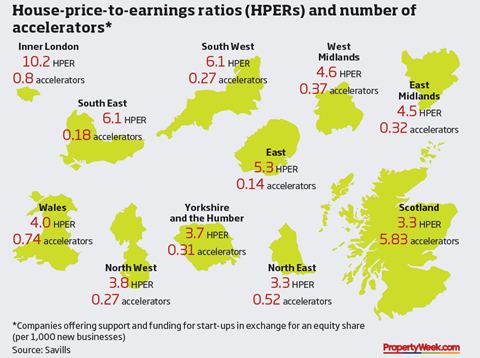