There has been a sharp slowdown in the delivery of large speculative sheds this year, reveals new data from GVA – and activity is set to slow further still in the second half of 2017.

There has been a sharp slowdown in the delivery of large speculative sheds this year, reveals new data from GVA – and activity is set to slow further still in the second half of 2017.

The research, based on a survey of more than 100 big shed schemes of over 100,000 sq ft, shows that 3.3m sq ft of speculative logistics and industrial space was completed during the first half of this year, down from a peak of 5m sq ft in the first half of 2016.

GVA predicts that levels of activity are likely to fall further to 2.3m sq ft over the second half of this year and to 1.6m sq ft during the first half of 2018. However, it notes, this slump follows a period of rapid growth between 2015 and 2016.

Find out more: A shed load of Panattoni - massive spec programme to focus on big-box

Speculative development undertaken since 2014 has been concentrated on core locations in West and East Midlands, which together accounted for 53% of all completions. The South East, by contrast, accounted for a quarter of activity while the North West accounted for 16%.

Of all completions, 45% of the space has been let, but 55% is still available. The average size of speculative units is 183,000 sq ft, with the larger units tending to be design and build.

More than 1.8m sq ft of spec units are under construction, including the 574,000 sq ft Altitude scheme being developed by IDI Gazeley in Milton Keynes, which is expected to complete in December this year.

"While there remains an underlying level of Brexit uncertainty, general demand levels for big sheds remain robust with a number of enquiries for existing units, design and build and land acquisition, particularly from discount retailers and ecommerce,” says Willmer.

“Levels of take-up are expected to be stronger for the second half of the year, with a number of very large requirements expected to sign.” 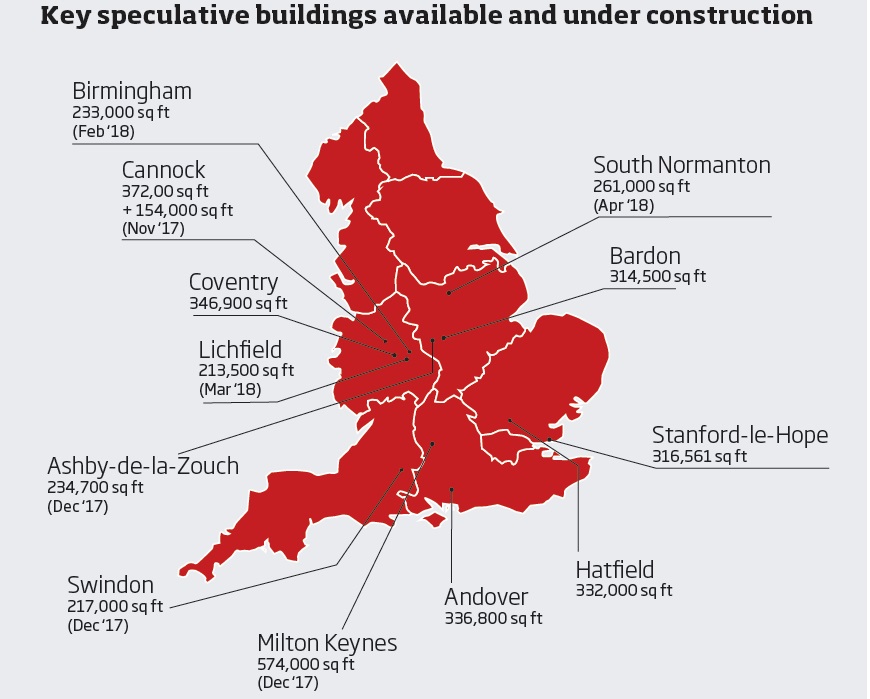