London’s deputy mayor for housing and residential development James Murray is among five new speakers confirmed for the all-new RESI Convention this September. 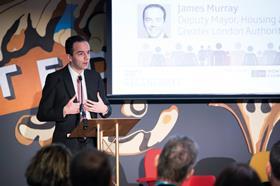 Murray has spoken at the last two RESI events in Wales and last year called for the government to “step up” and increase its investment in affordable housing to meet the capital’s housing need of 66,000 homes a year. Earlier this week, housing secretary James Brokenshire further outlined plans for the government’s proposed £9bn investment in affordable homes, £1.67bn of which is focused on London.

At this year’s event, he will speak on a panel about ‘solving the housing crisis’ alongside the Housing & Finance Institute’s chief executive Natalie Elphicke. During the session, Murray is expected to discuss recent revisions to the final draft of the London Housing Strategy, which he recently announced would focus further on build-to-rent (BTR).

The 12th annual RESI Convention, organised by Property Week, will take place from 12-14 September 2018 at Celtic Manor in Newport, Wales. For 2018, RESI has undergone a brand refresh to reflect the updated programme and an even greater focus on diversity and innovation.