The shortlist for Lambert Smith Hampton’s inaugural Enterprise Award can now be revealed - and it’s time for you to get involved. 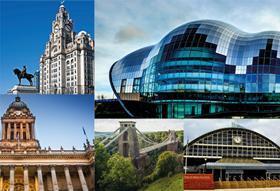 After decades of ever-greater centralisation by both Conservative and Labour governments, people were justified in being sceptical when chancellor George Osborne declared his intention to “deliver radical devolution to the great cities of England”.

However, with the government announcing a series of devolution deals with the regions following the election - including most recently in the North East - many sceptics are being won over amid the realisation that devolution could have a major impact on towns and cities around the country.

It was with this in mind that Lambert Smith Hampton, in partnership with Property Week, launched its Enterprise Award in July. The purpose of the award is to encourage the property industry and others to come up with fresh proposals for how devolution can best deliver economic and social benefits for England’s towns and cities.

In order to stand a chance of winning the £15,000 first prize, entrants were invited to submit proposals to address the following question: “How can innovative thinking from the property industry help make devolved government a success?”

Entrants were also encouraged to consider a series of follow-on questions, ranging across subjects including job creation and economic growth; infrastructure investment; and encouraging housebuilding and unlocking development sites.

The quality of entries was extremely high, something the judges remarked on during the shortlisting process. As Melanie Leech, chief executive of the British Property Federation (BPF) and judge of the LSH Enterprise Award, put it: “The range of interesting, thoughtful and potentially impactful submissions is fantastic to see.”

Ezra Nahome, chief executive at Lambert Smith Hampton and chair of the judging panel, added: “Devolution presents a real opportunity for the property industry to help tackle some of the UK’s most pressing issues. The shortlisted entries for the Enterprise Award showcase the best and most creative thinking that will be required if devolution is to become a success. These award entries provide food for thought, not just for the property industry but for UK plc and policymakers.”

A number of entrants were highly commended (see box below), but only six could be shortlisted for the award, the winner of which will be announced this month.

Now that the shortlist has been drawn up it is time for you to get involved. The judging panel will reach its own conclusion, but another winner will also be chosen via the poll on this page

You can also read the shortlisted submissions in full here.

While only six proposals made it onto the award shortlist, the judges felt that several other entries warrant a mention. Among the highly commended entries that did not make the shortlist were: