On a building site in north London, a crane whirs into action. A ‘module’ is lifted off the back of a lorry, hoisted high into the air and swung across the sky. Then, after much twisting and turning, it is guided into place by the site crew. One down, 678 to go. 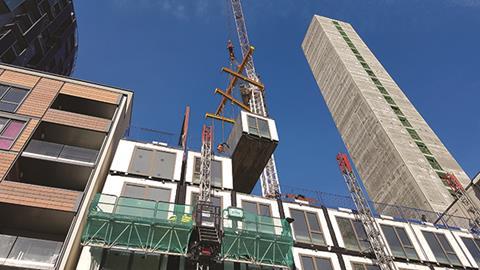 So far, six storeys have been erected and by the time contractor Vision Modular Systems is finished, the development will be the tallest modular building in Europe. Don’t expect the record to stand for long.

Modular construction is decidedly à la mode right now. Developers and government ministers are falling over themselves to promote the sector in the belief that its quicker build times could help them address the UK’s housing crisis.

It is not hard to see why there has been so much fanfare. The method of construction is far more efficient than traditional construction, as site manager Gerry O’Keeffe explains.

Once the modules arrive on site, 10 are typically put in place per day, meaning it takes just 15 weeks to deliver the modules and roof, he says. “That takes us until the end of April. We complete the fit-out and hand over in August for the [start of the] academic year,” he says.

“Using conventional construction methods, we wouldn’t hit this academic year, so in terms of the delivery to the market it’s 12 months faster than any other system.”

Apex House will be a new addition to the Wembley skyline

If they weren’t putting up a student block, the process would be six months faster, he adds, and quicker delivery is just one of the benefits.

The approach also allows for a “hugely reduced” labour force on site, with an install crew of just 12 on Apex House and a fit-out crew of 15, soon to grow to 20.

“We also reduce waste removal from the site so it’s a very efficient, environmentally friendly building,” says O’Keeffe. “The majority of the building is delivered at a rate of 10 to 12 loads per day, but over a much shorter period, so it reduces impact on the road network and also on the local community.”

Standing in the growing shadow of Apex House, it’s hard not to notice the surrounding towers - in this very densely developed part of Wembley, no two buildings look the same. One is curved, sleek and modern; another has more definite edges. All of them have different façades.

“Everything you can see in that picture is one of ours - it’s all modular,” says O’Keeffe. “We’re not trying to get designers, architects or planners to accept our product - we can deliver what they want. There’s huge flexibility in the system we have.”

Entering the concrete core of the building - one of the few non-modular spaces on site - O’Keeffe leads the way up the stairs into what will be a self-contained student corridor with five ensuite bedrooms and a large shared space with a kitchen, diner and sofas.

“Each room is a unit, as is the corridor, and they arrive almost fully fitted. The kitchen looks virtually ready to eat in and everything is plumbed and wired in as far as possible off site. 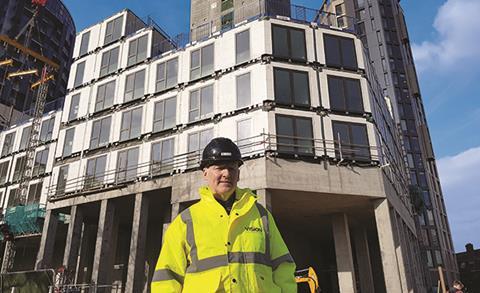 In the corridor, neat bundles of wires hang from the ceiling, ready to deliver the electrics, internet and fire alarm connections to the rooms and the central plumbing pipes simply need to be slotted together.

“It’s just joining them up,” says O’Keeffe. “The cables are cut to a specific length to minimise waste. The drainage is all installed and all colour-coded. With the plumbing coming out of the room, it’s always hot on the left, cold on the right.

“You make it as idiot-proof as possible so the site crew knows exactly what to expect when it comes from the factory.”

Keeping it simple means fewer mistakes are made on site, says O’Keeffe, adding that everything is tested before it is put into the module in the factory.

“The normal construction approach is to install everything and then test it,” he says. “We’ve pulled product out of the process before it ever got integrated into the module because of our approach. It means we have fewer snags.” 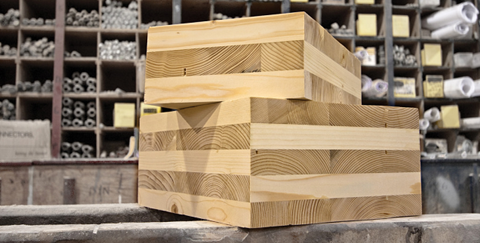 Offsite construction is a key element of the modular design - Source: Oregon Forestry/Flickr

O’Keeffe carries on along another corridor and into a slightly larger bedroom straddling two modules. Building materials are lying around, including plasterboard, flat-packed furniture and bagged plaster, which Vision Modular has come up with an ingenious way of transporting.

“We use the modules to deliver product to the floors, reducing crane time and site labour,” explains O’Keeffe. “We’re looking at ways to make the process more efficient all the time.”

That is not to say his team does not encounter problems. Modular construction projects have been hit by the shortage of skilled labour in the same way as other parts of the construction industry.

“There are also challenges specific to modular: namely the supply chain. Manufacturers and suppliers are still getting used to servicing the modular process, which requires constant delivery to the factory to maintain a steady production line.

“It’s an assembly line, so we’ve got to make sure suppliers can deliver to our timeframes because many suppliers in the construction industry aren’t used to operating in those timeframes,” says O’Keeffe.

The point is echoed by Vision Modular’s managing director Kieran White. He says suppliers still have a “way to go” before they are fully up to speed with the demands of a modular construction firm.

“On our production line, we’ll have 100 modules,” says White. “In virtually every one, we need to install a door. At the point that something like 20 or 30 of those are ready to be fitted, we need the doors in our factory on the right day. Suppliers are slowly getting that message that the overall order might be for 500 doors, but just as important to us is the certainty that we’ll get the doors when we want them.” 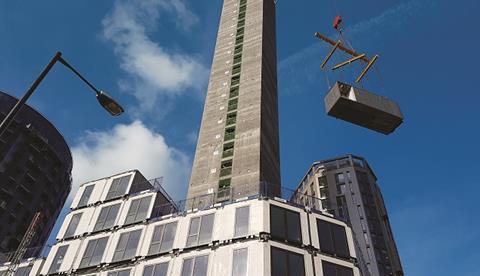 Modular construction also requires decisions to be made earlier in the process than with traditional construction. As the buildings surrounding Apex House demonstrate, developers and designers have a lot of flexibility to play with, but when a plan is set in motion it is difficult to alter.

Attention to detail is therefore critical right from the get go. “Once we get a set of drawings, we need to be into detailed design for six months before we’re ready to install the modules,” explains White.

The manufacturing process itself is not quite as cost effective as some have suggested. “I’m not sure where it comes from, but there’s an expectation this should be cheaper [than normal construction],” says White.

“We have a large facility to pay for, a significant investment in system, processes and tech and there’s an overhead that goes with that.”

It is the speed to market that can make modular cheaper. “In some cases we are cheaper because we deliver that much more quickly,” attests White. “You’re making significant savings on the building site in terms of people and traffic movement and you’re getting cost certainty because our ability to control our costs is far greater than on a building site. When we agree a price, we deliver it.”

O’Keeffe adds that because a lot of work is undertaken off site, modular projects are also less affected by the elements than conventional construction projects.

More developers seem to be coming around to the same way of thinking, prompted by the housing shortage and growing popularity of build-to-rent (BTR) - which is ideally suited to modular.

With institutions and student accommodation developers like Scape increasingly looking to modular to deliver their BTR schemes, it is no surprise that many are now asking how long it will be before modular is truly mainstream.

“In the last year or so, there has been a marked change in terms of the recognition of modular as a viable means of delivering housing,” he says. 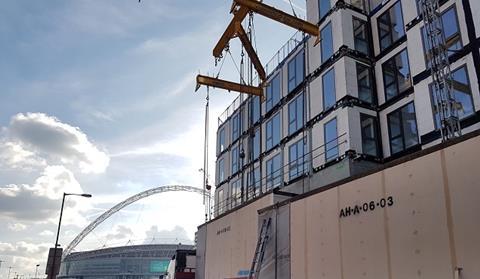 “And there is interest across the board, from major players to the smaller end of the spectrum. Finally, the time for it has arrived.”

Apex Tower is on track to be Europe’s tallest modular development yet, but it surely won’t be long before it is dwarfed by something even taller as more developers go mad for modular.