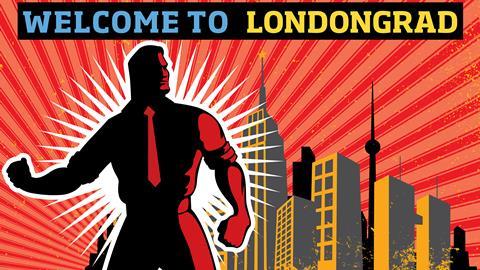 The bus grinds to a halt at Red Square so that our guide, Vladimir Ashurkov, can point out a building that belongs to a famous Russian oligarch who is a close ally of Vladimir Putin.

This information would not come as a surprise if we were in the centre of Moscow, but the bus is parked up in Belgravia, right in the beating heart of London, where Eaton Square has been renamed ‘Red Square’ thanks to the plethora of wealthy Russians who have moved into the neighbourhood.

Ashurkov is not a tourist guide by trade either – he is the leader of the Russian opposition in exile and one of the organisers of a ‘Kleptocracy Tour’ focused exclusively on UK property ownership by Russian citizens.

Property Week joined a similar tour in October last year, during which a gaggle of journalists were taken on a whistlestop trip around London looking at properties allegedly acquired with dirty money.

That tour was well attended, but there was still space on the bus. This time around, however – probably due to the fallout from the Salisbury poisoning scandal – the tour was overbooked. There were more journalists than seats and there were also a number of MPs among the guest speakers.

One of these MPs, Chris Bryant, kicked off the tour with the words: “Unfortunately, London has become the home of dodgy money and we have to change that.”

As Bryant’s comments illustrate, the narrative around Russian investment in the UK continues to focus on oligarchs and dirty money – and no wonder when the anti-corruption NGO Transparency International estimates that of the £4.4bn of London property acquired using illicit capital, almost £1bn is owned by Russians.

And having read @ManuMidolo's feature (https://t.co/UOPZIsS02v) vote in our new weekly poll:

Will recent worsening of diplomatic relations between Russia and the UK negatively impact on levels of Russian investment in UK real estate?

But the truth is that these days, the oligarchs are only part of the story. In recent years, they have been joined by a rather more modest group of Russian investors who are legitimately investing in UK property rather than just looking for a place to stash their cash – and who are increasingly interested in commercial as well as residential assets.

Between 2007 and 2014, Russian investors gobbled up UK real estate at a staggering rate of knots. Data from JLL estimates that in early 2014 almost 10% of all money spent in property in London was Russian. In the luxury residential market, numbers were even higher. According to Knight Frank, more than 20% of London homes with asking prices in excess of £10m were purchased by Russians.

Then something unexpected happened. In 2014, during the Ukrainian revolution, the Russian Federation invaded Crimea and annexed it. Western countries promptly imposed hefty sanctions on Russia. The consequences were severe: the country was plunged into an economic crisis and the rouble lost a third of its value within three weeks. Investments in Europe ground to a halt and in London, Russians stopped buying prime flats off plan.

“All of a sudden, instead of having a million in their hands, they had half a million,” says Alisa Zotimova, founder of AZ Real Estate. “People couldn’t afford to buy anymore and were losing their deposits.”

“It was the perfect storm,” says George Kachmazov, founder and chief executive of Tranio, an online property platform that advises clients from Russia and other eastern countries. “First you had the sanctions in 2014. Then the stamp duty surcharge in 2015. Finally, Brexit happened.”

It has taken more than three years for the market to recover. Dmitriy Zakirov, founding partner of LonGrad, a Russian property consultancy based in London, says that in 2015 and 2016, the number of clients registered on the company’s books fell by 50% to 75%. Then, last summer, things started to change.

That month alone, he sold an apartment to a Russian private investor for a bumper £17.5m. Although he stresses that there are no official statistics and that the data on the number of deals is confidential, he adds that the landscape for buyers with a budget of more than £10m is now “very optimistic”.

“Our clients have become increasingly sophisticated over the last couple years”

The greatest room for optimism is in the commercial sector, which to date has not attracted a lot of attention from Russian investors. The entry point for many Russians investing in the UK is often a second home, but Kachmazov detects a sea change.

“When you buy a second home you are just spending money,” he says. “With commercial real estate, you want some return. Our clients have become increasingly sophisticated over the last couple years. They’re particularly looking at serviced apartments, where they can get good returns.” 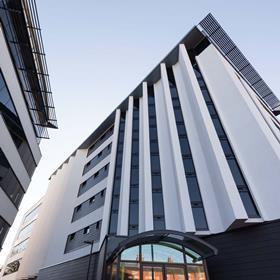 A private Russian buyer acquired the City Edge student accommodation block in Birmingham from Shaylor Holdings for £10.6m in March

Newcomers to the market often go through the same cycle. Last month, a private Russian investor snapped up a student accommodation block in Birmingham for £10.6m (AZ Real Estate advised on the deal). The buyer started out with four flats in London, worth around £6m.

“It was a good investment but the returns were not very high,” says Zotimova. “He wanted to have more impact, so his next mandate was for a commercial asset.”

Irina Ushakova, head of capital markets at CBRE in Moscow, has also noted the change in tack. “There’s great appetite for such deals,” says Ushakova, adding that Russians are particularly on the lookout for conversion and redevelopment opportunities.

But Russians are not prepared to flash the cash at any cost. The days when people thought “let’s just sell it to the Russians for twice the price” are definitely over, according to Zotimova. “Russians are not stupid,” she adds. “They’re pretty good businesspeople. They’re not overpaying; they’re looking for real opportunities.”

These opportunities are usually fairly small ticket, so unlike the headline-grabbing, multi-million-pound acquisitions by oligarchs, deals tend to fly under the radar.

“All the reports about trophy assets, big names and expensive houses are obviously very sexy and make really good news stories,” says Zotimova. “But that’s on the surface. It is not the only money invested by Russians.”

You need to dig a little bit deeper to see what’s going on. “Russians are quietly buying cash-producing assets,” she says. “They just don’t shout about it.”

However, there are some barriers to them securing these cash-producing assets. Zotimova readily admits that Russian investors have a reputation problem.

“I spend a lot of time trying to explain that not everybody in Russia is a crook,” she says, stressing that she doesn’t work with oligarchs or ‘politically exposed people’ (PEPs).

In the wake of the Salisbury poisoning scandal, it will be tougher than ever to put a positive spin on the credentials of Russian investors, especially in light of Theresa May’s pledge to enforce the so-called ‘unexplained wealth orders’ (UWOs), which came into force in January and require those under investigation to explain the origin of properties worth more than £50,000.

“My clients say that even if their money is clean and they have nothing to worry about, if they [the authorities] come after everyone, they’ll come after them as well,” says Zotimova.

“They say to me: ‘I should probably put my money elsewhere. Maybe I will invest it in Portugal or Cyprus where they’re not hunting down Russians.’ I can’t blame them.”

Some investors will inevitably be deterred by the worsening political relationship between Russia and the UK and the growing threat of further financial sanctions and regulations, but other investors won’t be put off.

As the old adage goes, ‘where there is risk, there is opportunity’, and given the weak pound there is plenty of opportunity in the UK at the moment. “It’s a buyer’s market now and they can get a good deal,” says Zotimova.

Other factors are also influencing where Russian money ultimately finds a home. CBRE’s Ushakova calls it a process of “geographic diversification”.

“The first instinct, 10 years ago, was to get to London,” she says. “Germany came in second. The UK attracts interest but it’s not the only target anymore.”

It is a view echoed by Tranio’s Kachmazov, who says that many of his clients already see Germany as a better destination for their money than the UK. Last year, Tranio published a report suggesting political and economic stability was the key factor for Russian buyers eyeing property in Europe.

“That’s why Russians love Germany,” he says. “Costs are sensibly lower there and the returns are more stable.”

Despite Germany’s growing popularity, agents say Russians still find the UK capital attractive. “London remains a safe haven and it is seen by Russians as the capital of Europe for doing business,” says Ushakova. “They are just very cautious at the moment.”

For all the talk of the apparent evolution of Russian property investors, the journalists on the KleptoTour were keener to hear about the deliberate profligacy of the oligarchs who had taken advantage of what Chris Bryant described as the “soft underbelly of English society”, by overpaying for UK property to get their money out of Russia.

However, as Vladimir Ashurkov emphasised towards the end of the tour: “Russia is not just the oligarchs. There is a small corrupt elite at the top of the Russian state. Most ordinary Russians just want what everybody else wants; they want less corruption and a better deal.”

Which is exactly what the new breed of Russian investors want too.