The value of assets held by the Queen’s property company has leapt 16.1% to a record high of £11.5bn. 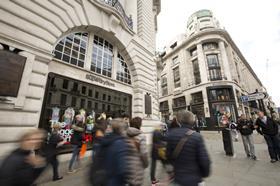 It is the first time that the value of the Crown Estate has passed the £10bn mark and means that it is now worth nearly double what it was valued at 10 years ago.

Accounts for the year to April, published on Wednesday, showed that the business posted a total return of 20.8%, outperforming its bespoke benchmark of 18.4% and the wider IPD universe on 17.1%.

The strong performance helped boost profits by 6.7% to a record £285.1m, which will be returned to the public purse.

The Crown Estate has benefited from its substantial presence in London’s booming West End which accounts for about half the portfolio and where it is currently building some 615,000 sq ft of new space.

Paul Clark, the Crown’s investment director, said the developments - which include St James’s Market and One Eagle Place schemes - were being delivered at just the right time, with tenant demand growing and supply at low levels.

“We are in the middle of the most significant development pipeline which this business has been had,” Clark said. “We’re very happy with the timing of that and it’s playing a significant part in our outperformance.”

With 400,000 sq ft coming to market in the coming year, The Crown estimated it will deliver 50% of total office supply in the core West End during 2016.

Clark said that as the West End developments complete, the company will turn its focus to retail outside London, which accounts for about 20% of the business today.

“Looking forward, we see more opportunities outside London for prime retail schemes given the paucity of quality retail supply in recent years,” he said.

The Crown is currently building the new Westgate Oxford in a joint venture with Land Securities. In a further sign of its belief in the potential of upmarket out-of-town retail, it bought Fosse Shopping Park in Leicester with Gingko Tree for £345.5m last year and agreed this spring to fund the development of the £140m Rushden Lacks shopping centre.

The company has a growing offshore wind energy portfolio - generating an income by leasing the seabed to developers. Last year, it generated profits of £19.1m and the value of the portfolio increased by 18% to £590m.

Offshore wind currently meets over 4% of the UK’s electricity demand and the government’s target is to increase this to 10% by 2020.