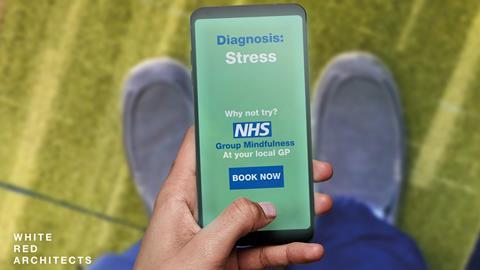 A picture of health: GP surgery of the future

At this year’s Mipim UK, seven architects pitched their ideas to a panel of judges from NHS Property Services on what the GP surgery of the future should look like. Organised by architects resource Archiboo, the event saw the firms go head to head in a battle to come up with concepts that would work for patients and staff and that align with the NHS’s strategy for the future.

Here, Property Week presents a summary of the seven ideas that were pitched and reveals the winning practice.

While acknowledging that his company had little experience of designing medical facilities, Softroom director Oliver Salway said that it had “evolved a specialism providing highly imaginative but carefully thought-through spaces that function beautifully”. 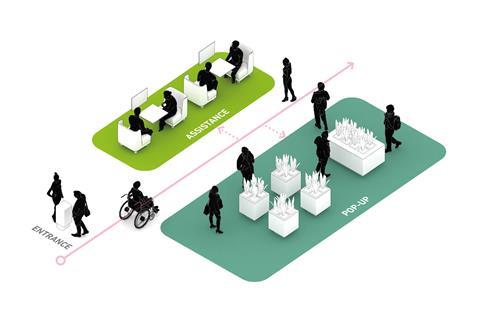 Salway said that to optimise the design, Softroom would need “a proper period of immersion” into the world of NHS Property Services, but he spelled out some broad themes focused on transforming the patient experience by viewing them as customers.

“Upon arrival at the GP, with most admin tasks already completed remotely, patients could be welcomed by a greeter, who could provide assistance where needed and importantly help humanise the experience [see above image],” he said. “The entrance could also feature health-related pop-ups to bring activity into the space and increase wellbeing awareness.

“Moving inside, the commercial sector has taught us that even simple rebranding can help reframe our thinking and unlock possibilities. So rather than ‘waiting rooms’ that suggest time lost, they could become ‘lounges’ or ‘living rooms’ – like our Eurostar lounge in Paris that actually makes missing a train a bonus,” added Salway.

Judges’ verdict: The judges praised Salway for his focus on changing the nature of the patient experience, as well as the simple rebranding of waiting areas to create a lounge experience. They felt that approaching the design from an outsider’s perspective actually helped his pitch.

AOC’s presentation was based on its work on Pembroke House in London, where the practice is working with a major local health partner and statutory funders to create a GP surgery that is integrated with the community. “Pembroke House offers a friendly and supportive space for everyone, with an inclusive volunteering programme tailored to each person’s needs,” said director Tom Coward.

At the centre of the building is what Coward described as a “living room”. “It’s a space in the centre of the community for wellbeing partners to offer joined-up services,” he said. “There is a shift in understanding of consultation, the vital joined-up conversation over time that provides an articulate prescription of care in response to complex needs.”

To make the living room financially viable, the scheme includes a back-office space where administrators can support multiple GP practices by making use of modern technology. In addition, the space hosts hot-desking facilities for community health workers and related professionals. According to Coward, the model is replicable elsewhere and could be used to update the NHS’s existing estate.

Judges’ verdict: The judges praised AOC for reusing the existing estate and focusing on wellbeing.

For his pitch, Gatti Routh Rhodes director Richard Gatti focused on the company’s redevelopment of a 1950s building in Bethnal Green, east London, which was previously home to both a church and GP surgery. The idea was to take what was already a mixed-use building and run with it. “So the structure and materiality of the church bleaches into the rest of the building and provides space for community activity,” he said. 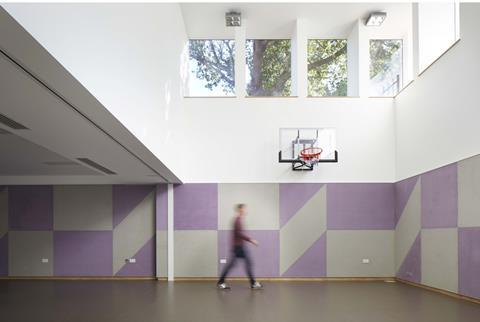 In addition to a church, GP surgery and recreation space, the new building includes storage space for a food bank that doubles as accommodation for homeless people, as well as a café. “The café is on the most prominent corner of the site,” said Gatti. “It encourages people to get over the threshold and access community services within.”

In order to fund the community spaces, the project includes apartments on the upper levels, something that Gatti said could easily be done on other redevelopment projects. “There is the potential for this partnership working to produce mixed-use buildings that can be supported by residential accommodation above,” he said.

Judges’ verdict: According to the judges, Gatti delivered a strong message about the underdevelopment of NHS buildings. They also said that the concept of a truly mixed-use, community-orientated building chimed well with NHS strategy.

Gruff director Rhys Cannon opened his pitch by stating that the GP surgery of the future had to be about more than medical services. “We think that GP provision is a means of wayfinding through to a variety of other clinical referrals, community services and lifestyle choices,” he said. “The building’s design must reflect this and aid the growing trend of ‘social prescribing’ [a way of linking patients in primary care with sources of support within the community] or treatments beyond those solely under the umbrella of the NHS.”

Cannon underscored the importance of the entrance to the building being as welcoming as possible. “The role of the reception is vital in providing moments of human contact and helping to combat social isolation,” he said. “These interpersonal interactions can so often make or break the experience of visiting a GP.” 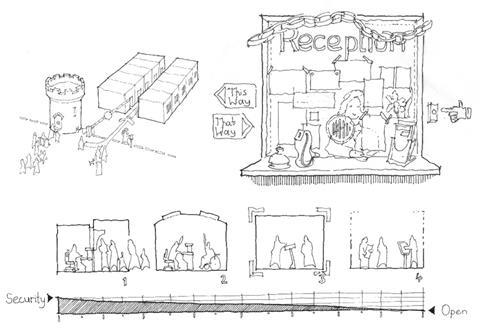 Cannon added that the whole idea must be to knit surgeries into the communities they serve. “We want to see barriers broken down and surgeries to be seen as extensions to the public realm,” he said. “Greater permeability should allow for an outward-looking perspective to alleviate the claustrophobia of the waiting room. We see no reason this can’t be provided retrospectively in the existing estate.”

Judges’ verdict: The judges praised Cannon’s use of diagrams as a storytelling device, as well as the idea of the surgery as an extension to the public realm. They said this was something that the NHS would like to encourage in the future; so too was the reuse of the existing estate.

Henley Halebrown studio director Craig Linnell opened his pitch by describing four GP surgery projects his practice designed between 2003 and 2012. “The designs for all the buildings focused on patient experience and creating efficient, adaptable and flexible facilities,” he said.

Linnell went on to describe the challenges facing the NHS and how it planned to respond. “The NHS five-year forward view includes stronger links between health and social care, shifting the agenda from treatment to prevention and engaging and equipping communities to self-help,” he said.

Architects have a vital role to play ensuring that GP surgeries help make the links between clinical care and other organisations and initiatives aimed at keeping people healthy, he argued. “Future designs for GP surgeries will help deliver this, becoming more accessible and relevant to both the well and the sick and providing new spaces to actively support good health and social care,” he said.

Judges’ verdict: The judges thought Linnell’s presentation included some effective images and made a persuasive case about his practice’s credibility and ability. However, they said they would have liked him to share more thoughts on future projects.

“Why are environments for healing so rarely uplifting spaces?” asked senior founding partner Fred Pilbrow at the start of his pitch. “By the time you see your doctor you’re already in a deep gloom because you’ve had to negotiate tortuous, poorly lit, airless spaces.” 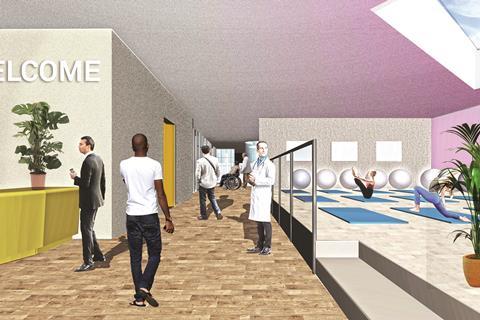 Pilbrow said that his company was currently on site with a facility for UCLH. “We brought the patient areas to the facade, so you’re in a clear, logical sequence of spaces – daylit, lofty and clear,” he said. “Go up to the roof and there is a garden for staff and patients.”

He added that future GP surgeries need to reflect the fact that consultations increasingly take place online or in group environments and focus on health and wellbeing as well as pharmaceutical solutions.

“That has profound implications for the studio in terms of more open-plan spaces,” he said. “Let’s get the digital filing to free up office space and the receptionist out from behind her wall to make a better environment for patients in the future.”

Judges’ verdict: The judges described Pilbrow as a seasoned public speaker and said that his presentation had been visually exciting. They also liked the idea that GP surgeries should be uplifting spaces for healing.

White Red Architects director Dicky Lewis opened his pitch by offering a picture of his fiancée at work as a GP.

“As you can see, she works in a small room with no windows,” he said. “Can you imagine bringing a patient in a wheelchair in here?”

Lewis said that medical professionals were currently working on incredible advances in healthcare. “But why isn’t this reflected in the design of hospitals and GP surgeries?” he asked. “We need to design for the future, for the ageing population, for the welfare of patients and doctors.” 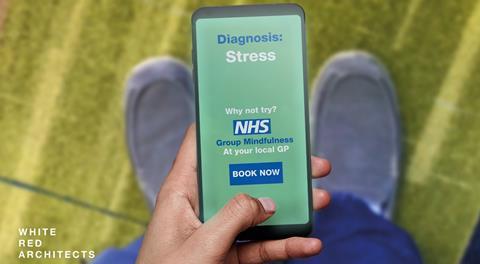 Producing a model with spaces for exercise and other wellbeing activities at the centre of his proposed building, Lewis said that preventative solutions needed to become a fundamental part of the surgery of the future.

“Prevention needs to be located within the GP’s practice,” he said. “There needs to be space made available for preventative measures. We see this space as the core of the GP practice. It could be that the GP surgery of the future is somewhere you go more often in health than in sickness.”

Judges’ verdict: The idea of visiting more in health than in sickness caught the judges’ attention. So too did the idea of meshing the preventative measures into the design of the building. They also appreciated the focus on providing a good working environment for professionals as well as visiting patients.