Gigafactories are set to make a big impression on the UK’s industrial property landscape. Electric vehicle sales are already steadily growing and this growth is expected to accelerate in the years ahead. The upshot is that electric vehicle manufacturers need to step up production of giga batteries to power these cars. 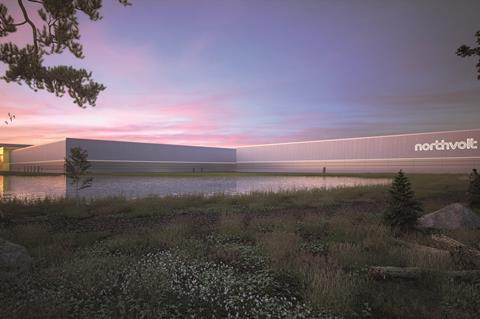 The Faraday Institution estimates that domestic demand for electric vehicles will be sufficient to support eight large battery plants across the UK by 2040, each with a production capacity of 15 gigawatt hours (GWh) per year.

Start-up Britishvolt has already confirmed the site for what is likely to be the first gigafactory in the UK and earlier this year Property Week revealed the UK government was on the hunt for four million sq ft of industrial space for a potential electric vehicle gigafactory for Elon Musk’s Tesla (p31, 29.05.20).

So where are the other gigafactories likely to go, and how much space could this nascent sector ultimately occupy?

It is easy to see why many UK industrial agents are excited by the prospect of a network of gigafactories springing up across the nation. The factories can have footprints stretching to millions of square feet and the largest cost as much as £1.25bn to build.

There aren’t many available sites in the UK that can fulfil this type of requirement. Britishvolt chose Bro Tathan business park in South Wales following a six-month analysis of 30 potential sites.

The company will develop a 30 GWh gigafactory at the park in conjunction with the Welsh government. Both parties signed a memorandum of understanding in July 2020 to collaborate on the potential building.

Listing the elements Britishvolt considered when choosing the business park, its chief executive Orral Nadjari, cited: import and export accessibility, skilled labour and proximity to customers and industrial companies. On announcing the deal, Nadjari added that he chose the UK because of the projected demand for electric vehicles and gaps in the supply chain.

“They’re confident they’ve a market they can sell to,” says Richard Sullivan, national head of industrial and logistics at Savills, adding that while the factory’s dimensions have not been disclosed, Britishvolt could take a similar approach to the one taken by Tesla at its gigafactory development in Nevada, which is being built out in phases.

“I would start with a 200,000 sq ft to 300,000 sq ft facility, start production, see how that goes, and if it manifests, expand as the market develops,” he reasons. “How much servicing of the automotive industry Britishvolt expect to do from South Wales is hard to tell.”

Many industrial agents believe the areas that could benefit most from any gigafactory building boom are the ones with a long-standing tradition of car manufacturing.

“It is likely that car manufacturers will need their supply chains as close as possible to their manufacturing facilities, but in the UK there is a relative shortage of labour, particularly within the main manufacturing hubs,” says Andrea Ferranti, head of industrial and logistics research at Colliers. “In addition, there is a lack of development land. The North East and Yorkshire are strong candidates, as well as the South West and Midlands, due to the strong presence of aerospace and manufacturing companies.” 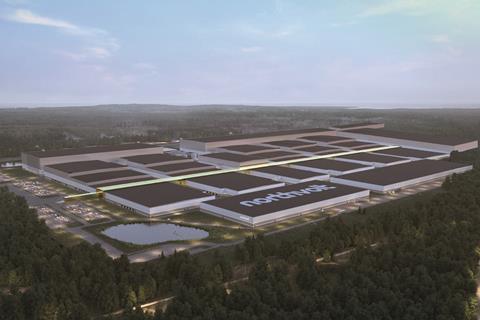 Heavy output: The Skellefteå plant will produce 32GWh of battery capacity per year

While the area would be an obvious place to build a new gigafactory thanks to its car manufacturing roots, “the government will be keen to distribute gigafactories in different regions to spread the benefits rather than allow them to congregate just in one place”, believes Andrew Jackson, managing director for industrial at Avison Young.

The government will play a key role in determining where some of these factories land. It sees a bright future for the production of electric vehicles in the UK and has announced up to £1bn funding from its Automotive Transformation Fund will go towards developing UK supply chains to produce electric vehicles and further research and development.

A spokesperson from the Department for Business Energy and Industrial Strategy said: “The government is committed to meeting the need for fast-paced development of battery technology and to securing a gigafactory in the UK.

“To support this, we are investing hundreds of millions in R&D through the Faraday Battery Challenge, the UK Battery Industrialisation Centre and the Automotive Transformation Fund, as we work towards achieving net zero emissions by 2050.”

It will need to start securing some of these gigafactory sites soon if it wants to keep pace with rising demand for electric cars.

Last year, 37,850 electric cars were sold in the UK – up from 15,510 in 2018 – and that trend has continued into 2020. Earlier this year, Uber struck an agreement with Nissan’s Sunderland factory to buy 2,000 Leaf cars for its London drivers. It is currently still a drop in the ocean compared with petrol and diesel car sales, but it is anticipated electric car sales growth will accelerate in the years ahead.

“Targets estimated by Faraday are based on a gradual 20-year transition where the automotive market will change from majority diesel and petrol vehicles to 50% new car sales being electric vehicles by 2035 approximately,” says Stephen Gifford, chief economist at the Faraday Institution. “If eight gigafactories are supplied, this will increase jobs in the automotive industry and battery supply chain from 186,000 to 246,000 by 2040.”

The other reason everyone is keen to attract more giga battery producers to the UK is that they depend on a significant supply chain of other businesses that provide the raw materials to produce the batteries.

“This is a new industry and the government needs to do work on improving and attracting the cell component industry within the UK,“ says Gifford. “Without research, development and funding opportunities for the UK, gigafactories may drift towards Europe.”

The UK already faces strong competition from European neighbours that are also keen to attract gigafactory operators thanks to the economic benefits they offer.

“With difficulty in securing gigafactory locations, will car manufacturing shift to outside the UK?”

Sweden, Germany and Poland have set similar targets to the UK in terms of the creation of domestic giga battery plants and Sweden appears to have stolen a march on its rivals.

Battery developer Northvolt was founded in Sweden in 2016 and is now on site with one of Europe’s largest gigafactories, in Skellefteå, a prominent area for home grown raw-materials and mining clusters. When finished the battery plant will produce 32GWh of battery capacity per year.

Meanwhile, last year it was announced that Tesla planned to build a new gigafactory on the outskirts of Berlin. When you throw the looming spectre of Brexit into the mix it is little wonder that some UK industrial and logistics experts are sceptical as to how big an impact gigafactories might have on the sector.

“It’s impossible to know how much demand gigafactories are going to generate in terms of built space,” says Savills’ Sullivan. “I have fairly cynical views on how many will end up being in the UK, a small landmass with a large population. Are there better locations globally?

“This could mean significant importing. With diesel and petrol engines on the decline and difficulty in securing gigafactory locations domestically for electric vehicle factories, will car manufacturing then shift to outside the UK?”

Within the UK, 80% of all new car sales are exported and, although it has an established diesel and petrol car manufacturing industry, the size of the country’s electric vehicle manufacturing sector is modest in comparison.

“The thing that affects UK demand for batteries is not the cars sold domestically but the sheer amount we export,” says Adam Chase, director at energy and sustainability strategy consultancy E4tech.

“Why build gigafactories in places that may end up exporting the majority of its product? You would build elsewhere or, if the logistics made sense, in the country they’re being exported to.”

He also remains sceptical as to how many of the projected gigafactories will actually be built. “Lots of European countries have forecast gigafactory numbers like the UK, but I don’t think all of these factories will get built,” says Chase. “Right now there isn’t enough demand for the volume.”

But with the demand for electric vehicle models set to grow significantly – Bloomberg New Energy Finance estimates that by 2026 electric vehicles will account for one fifth of all car sales in the UK – it may just be that we have not yet reached the tipping point.

Once that happens, the first movers will, as ever, have the advantage. Chase agrees that “countries that get going soon [on delivering gigafactories] are going to be in a better position” to capitalise on the growth in sales of electric vehicles.

Whether the UK will establish as many as eight gigafactories by 2040 remains to be seen, but the Britishvolt deal and the possibility of Tesla establishing a manufacturing base in the South West surely has to bode well.