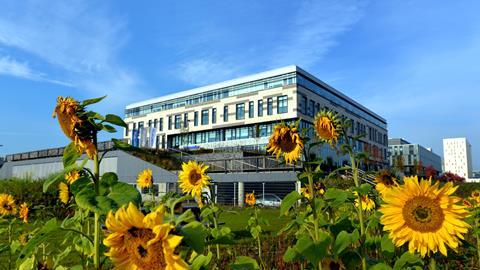 How developers in the Netherlands are addressing the climate crisis

It is the little details that bother Owen Zachariasse.

On a tour of Park 20|20 – an ultra-sustainable business park on the outskirts of Amsterdam – the JLL director expresses disappointment that the black plastic bags being used in the park’s bins cannot be recycled.

Park 20|20 runs entirely on renewable energy and every element has been designed so it can be reused or recycled in another scheme later down the line, except the bin bags – much to the irritation of Zachariasse, who was head of sustainability at developer Delta when construction began in 2010.

He shouldn’t beat himself up too much, though. The park is one of several highly ambitious projects in the Netherlands that are at the cutting edge of sustainable development.

Thanks to a combination of entrepreneurial spirit, a strong industry focus on becoming carbon neutral and tough government legislation, the country is blazing a trail in circular development – and putting other countries, including the UK, to shame.

Property Week took a look at some of the groundbreaking schemes in and around Amsterdam and talked to the people behind them to find out why the country has embraced circularity with such zeal.

The numbers certainly make for sobering reading. We all know that 40% of global carbon emissions are produced by the built environment, but few are aware that a significant percentage of those emissions are generated at the very beginning of a building’s life, at the development stage.

According to a 2014 paper from UKGBC, the processing of materials needed for construction can account for anywhere between 30% and 70% of a building’s lifetime emissions depending on its type.

In short, if a developer wants its warehouse, office or residential scheme to be truly carbon neutral, it needs to become part of the circular economy. 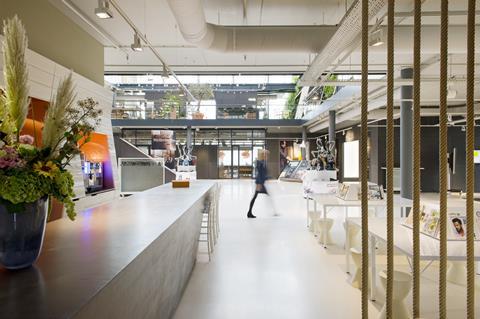 Park 20|20 is a good example of what this means in practice. Every element is recycled or recyclable. All the interior structures, building facades and bricks on the pathways are fixed together using joints and bolts rather than glue or cement. The result is a development that can be completely disassembled and the parts reused if need be, meaning nothing will be wasted.

Standing in the middle of the unfinished business park, Zachariasse points to the surrounding water features. They don’t just look nice. All the water used in the park is cleaned, filtered and recycled via the site’s natural water filtration system – no chemicals are used.

Similar attention to detail can also be found at Circl, a mixed-use restaurant and office building attached to Dutch bank ABN AMRO’s headquarters in the bustling Zuid business district of Amsterdam.

Circl also runs entirely on renewable energy and every element is either recycled or recyclable.

When ABN AMRO started work on the project in 2013, it and Park 20|20 were two of the only developments in the world attempting to adhere to the principles of the circular economy. 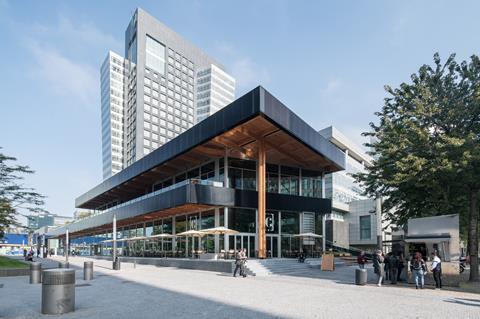 While the latter may be good for the circular economy in the long run, it still requires the development of raw materials and this produces carbon emissions.

“In order to reach the Paris climate agreement goals, we cannot solely focus on energy sustainability,” says van Heel. “We also have to take into account the amount of carbon produced by making materials for buildings.”

To ensure building materials can be recycled, the Dutch construction industry needed a way of classifying the materials and products in existing buildings.

This is where Madaster – a platform that allows businesses to register all the materials in their building – comes in. The idea is that none of those materials will then be lost when the building is demolished. Instead, they will be reused. Both Park 20|20 and Circl have a ‘materials passport’ issued by Madaster.

Developing a building entirely from recycled and recyclable parts is not without its challenges. Only a small number of buildings in Amsterdam use Madaster’s materials passport, so finding recycled building materials can be difficult. It is also surprisingly expensive, as developers must pay VAT on recycled products that would have already had VAT paid on them when bought new. 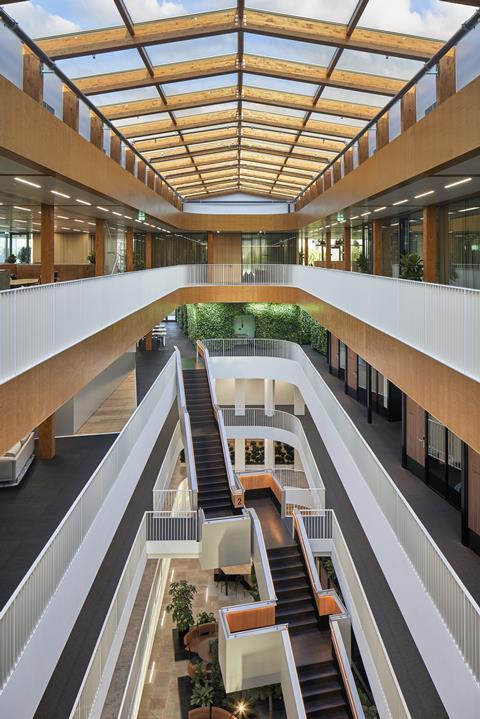 Interior: inside the EDGE Olympic building

Both occupiers and investors are pushing developers to be as sustainable as possible, but these additional costs can compromise the economic viability of schemes looking to embrace circular principles.

ABN AMRO’s van Heel adds that it was very difficult to get a building permit for Circl because ABN AMRO was unable to say for sure what the building would look like until it had sourced all its materials. It also had to convince architects and construction companies to use secondhand materials, which do not always match desired specifications, as well as convince fire experts that materials were safe to use.

Then there are the aesthetic considerations. The materials used to build Circl feature dinks and scratches from their previous use and give the building an edgy, industrial look that may suit the trendier parts of Amsterdam, but do not necessarily work in the corporate world of Amsterdam Zuid.

“If clients walk into an office building and see unpainted, unfitting secondhand material, then they start wondering,” says van Heel.

A further challenge is that ‘circular building’ lacks a standard definition. This is a cause of frustration for many Dutch property experts.

They expect the government to eventually issue guidance on the matter, but for the time being there is no way of knowing whether a building is completely circular, or even what a circular building actually is. 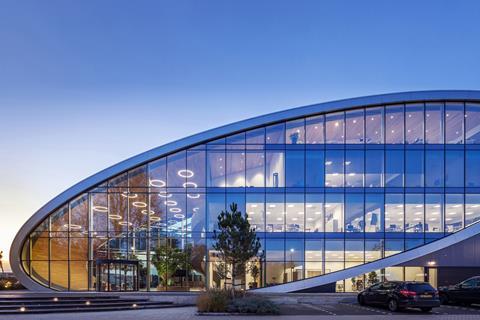 JLL’s Zachariasse is particularly concerned about this. Without clear government guidelines, he fears that sustainable real estate in the Netherlands could become a self-congratulatory box-ticking exercise.

“I’m totally not interested in reverse-engineering the BREEAM rating system to get as many points as cheaply as possible,” he says. “That is the definition of greenwashing.”

Many of the Dutch real estate professionals Property Week spoke to are confident the government will act sooner rather than later, noting its strong track record of passing more progressive climate legislation than the UK and indeed many other countries.

The Dutch planning system is a good example of this. “If you follow Dutch regulations for building permits, you will automatically have a BREEAM ‘Very Good’ certification,” says Diederik de Jonge, partner at Heembouw Architecten, the architectural firm that helped to create New Logic III, a warehouse development with a BREEAM ‘Outstanding’ rating of 99.4%.

Climate-conscious regulation does not stop at the planning stage. The Dutch Ministry of Economic Affairs and Climate Policy’s energy efficiency obligation “requires organisations in the Netherlands that use 50,000kWh of electricity or 25,000 cubic metres of natural gas (or equivalent) or more per year to take energy efficiency measures with a payback period of five years or less”. In other words, if there is a more efficient energy-using product on the market that could replace any energy-using product in a given company’s real estate portfolio, that company has to make the switch if the money spent on the new product would earn the company its investment back in five years or less.

Such pressures have forced the nation’s property sector to seek out innovative approaches to development and set a new environmental standard for green building design.

A good example of this is The Edge, which was named the world’s most sustainable building by BREEAM from 2014 to 2016.

Erik Ubels, chief technology officer at Edge Technologies, says the Dutch are at the forefront of sustainability in real estate because of their inventiveness. He says Edge Technologies’ portfolio is a perfect example.

In line with the principles of the circular economy, the company is redeveloping EDGE Amsterdam West, a 645,000 sq ft office scheme in the west of the city, to BREEAM ‘Outstanding’. 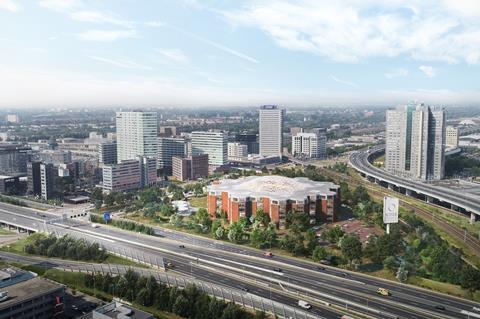 Ubels says that unlike other developers, Edge Technologies makes a point of maintaining control of the technology in the developments it has built even after they are sold and will help to update and modify this technology in line with the latest breakthroughs in sustainable real estate.

This hands-on post-sale approach is written into the contracts of every building it sells and Ubels says one of the reasons for doing this is to protect the company’s status as developer of some of the world’s most sustainable buildings.

“The Netherlands has always wanted to be best in class in a lot of things,” he says. “We are very much a best-in-class country.”

For van Oers, any real estate market looking to emulate the success of the Dutch market needs to show the same level of determination to push the boundaries.

The moral argument for sustainable real estate is self-evident and the financial argument is growing, but perhaps what is really driving the Dutch property market towards a zero-carbon, circular future is its proximity to the problem. As Ubels points out, most of the Netherlands is below sea level already. If other countries are going to embrace the circular economy in the same way the Netherlands has, they will need to feel that same sense of urgency.