Christmas arrived early for the housing market this year. Not from a bedazzled child’s aspect; more, at least it would seem from early evidence, from a turkey’s. 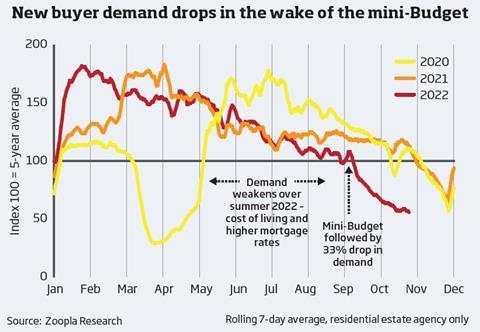 I’m referring to the traditional slowdown among buyers rather than the festive round of parties for estate agent staff. Visits to agents and housing developments normally tail off in November. This year, buyer demand started trending down in July, as cost of living pressures built up, but fell by nearly half following former chancellor Kwasi Kwarteng’s car crash mini-Budget, according to Zoopla’s latest research (see chart).

Two classic early warning signals for housebuilders loomed large in a succession of trading updates last month from several of the largest developers. The ‘sales rate’, the number of buyer reservations per site per week, had slumped: Persimmon’s fell to 0.48 in the six weeks following the mini-Budget, down by more than a quarter from the 0.66 in the preceding 12 weeks and the 0.7-ish that has been the industry norm since the year dot.

An even more closely scrutinised metric is ‘cancellation rates’. Persimmon, the wealthiest housebuilder by stock market value, saw the proportion of reservations being cancelled rising from 21% to 28% since mid-year. Prices were holding steady, but the first sign of nerves is that all the developers said they had largely paused their land buying.

Most official data lags months behind, so the housebuilders paint a more up-to-date picture. However, Zoopla’s most recent report shows a 28% sales volume fall last month compared with November 2021. Although sellers have on average cut asking prices, achieved prices still rose by 1% during the month.

Can buyers staying away be any surprise? Since July they have seen two monarchs, three prime ministers, two budgets, soaring borrowing rates, rising inflation, and war in Europe. Plus journalists have seemingly been predicting an impending ‘crash’ more than the winner of I’m a Celebrity.

But is the reticence among buyers a case of them leaving the market altogether, or merely sitting on their hands until the economic outlook becomes clearer? I’d suggest a bit of both, but lean towards the latter.

First, mortgage costs. The rate on fixed deals (the great majority of all lending) has fallen from the post-mini-Budget spike. These are driven by gilt yields and ‘swaps’ rather than the official Bank of England rate, which weighs more heavily on variable rate mortgages. The key swap rate underpinning lenders’ five-year fixes has fallen from 5.5% to below 4% since early October. To this, they add a margin, but I’m told by a mortgage director at a ‘challenger’ bank that there’s still a healthy appetite among his competitors. Rather than the 6%-plus interest levels pundits prophesied amid former prime minister Liz Truss’s tenure, something around 4.5% sounds plausible, especially if the inflation rate starts falling from October’s worse-than-expected 11.1%.

One of the few tax cuts surviving from Kwarteng’s ill-fated bonanza is to stamp duty, but Jeremy Hunt has imposed a deadline of March 2025. This should be enough time to chivvy on buyers without the stampede that followed Rishi Sunak’s original, shorter holiday.

More evidence of buyers being poised to return is provided by Rightmove, which reported that more buyers were looking to rent. Bad for house sales? No, it concluded that many were putting their decisions on hold in the hope that borrowing costs would fall next year. Among potential first-time buyers, 42% had already saved up sufficient deposits but are facing soaring rents.

Early January should point to what way the spring market might head. For what it’s worth, my prediction for 2023, generated via my proprietary finger-in-the-air-onomic model is: secondhand transactions down 10% to 15%; new-build sales declining by less; prices off about 5% (but well above 2019); housebuilders’ margins squeezed a bit, but, at worst, only modest land writedowns.

Hardly a cracker of a year, but far from a damp squib.