In the past, many developers claimed to be creating ‘mixed-use’ schemes by simply sticking some ground-floor retail below a block of flats without much consideration for the wider area. 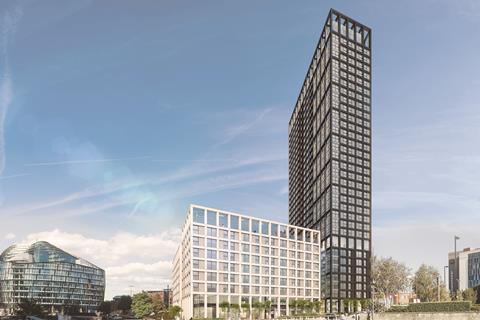 However, the blurring of uses, rise of new asset classes and decline of traditional property investments has led genuine mixed-use development to become one of the most active and interesting sectors in real estate, with residential typically at its core.

Given the country’s pressing need for new housing, it should be no surprise that homes are often at the heart of mixed-use projects.

Higher residential values make it easier to stack up resi-led schemes from an investment perspective, while having hundreds – or thousands – of people living on your doorstep means guaranteed footfall for retail and leisure occupiers.

Meanwhile, for major corporates, it is hugely attractive to be able to offer potential employees the ability to live just minutes away from the office. Build-to-rent works particularly well here, as renting requires a lot less upfront cost than buying and also offers more flexibility.

Paul Pavia, head of development at MEPC, agrees having high-quality rental housing nearby is a major draw for commercial occupiers.

“To be able to say to companies ‘we have a ready-made supply of good-quality homes right next door to your offices’ is a big bonus,” Pavia explains.

The amenity and service offering of many BTR schemes appeals to young professionals too, especially those who have spent their university years in modern, purpose-built student accommodation.

To Johnny Caddick, managing director of Moda Living, BTR makes perfect sense in mixed-use schemes. “For employers, especially in regional cities, being able to point to high-quality rental housing nearby helps them to capture and retain talent,” he says.

However, mixed-use is evolving beyond just the blending of housing, offices, retail and leisure. The rise of alternative asset classes, such as automotive, means some more unusual schemes are coming forward.

In Battersea, Lookers car dealership, developer Linden Homes and agent Rapleys have juxtaposed the largest Volkswagen showroom in Europe with 173 one-, two- and three-bed apartments. It is thought to be the first UK mixed-use scheme to include a car dealership.

However, the phrase on everyone’s lips at the moment is ‘beds and sheds’ – industrial and residential. It is not hard to see why: there is huge pent-up demand for housing in the UK, while British consumers are some of the most digitally savvy in the world. As a result, traditional retail locations, such as the high street and shopping centres, are in decline, but there is pent-up demand for the type of logistics facilities needed to service the ecommerce boom.

One successful example of beds and sheds sits just behind St Pancras station in central London, where students are housed above a Travis Perkins store and delivery centre.

But co-locating industrial and residential is easier said than done. How many would really want to live above a distribution hub, for example?

“Co-location of beds and sheds makes a lot of sense, given the housing pressures facing most cities and the continued rise of last-mile logistics,” says Vanessa Hale, new UK chair of the Urban Land Institute. “But there are a lot of issues to consider from both an occupier perspective and at an operational level, which mean that investors have yet to get comfortable with the concept.”

The uncertainty facing traditional offices and retail has also caused investors and developers to look elsewhere for anchor tenants to underpin mixed-use schemes.

Nick Jacobs, chief executive at Rowan, says: “Investors know if they want to have a building or development that is future proofed, they need to listen to – and provide – what people want.”

To Ken Dytor, executive chairman of Urban Catalyst, which specialises in mixed-use and regeneration projects, cultural occupiers are an obvious alternative. Urban Catalyst recently secured planning permission for a £1bn revamp of Purfleet town centre, which will create a media and creative hub along with thousands of homes, to be brought forward with joint venture partner Swan Housing Association.

“In a fast-changing world, cultural institutions can step up and play the role historically played by major corporates or big-name retailers in anchoring a new place,” noted Dytor in a recent Property Week comment piece.

Caddick, who is also director of Caddick Group, agrees about the importance of culture. Caddick Group’s £300m mixed-use SOYO scheme in Leeds city centre, where it is developing 515 BTR homes, counts Leeds Playhouse and Northern Ballet as neighbours.

Public realm can also act as an anchor tenant, Caddick argues, with millions being invested in open and green spaces at SOYO. “Ultimately, public realm is what ties it all together,” he says.