Another day, another round of bad news for Britain’s high street. Earlier this week, the British Retail Consortium and Springboard survey found that more than one in 10 shops (10.3%) were vacant in July – a four-year high. 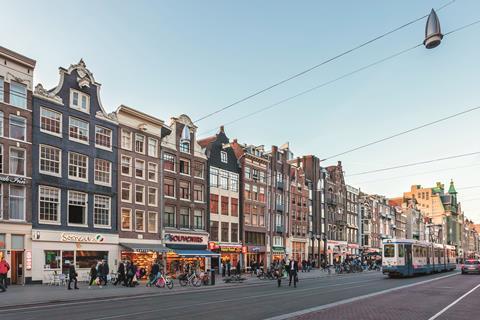 Retailers have at various times blamed grey skies, heatwaves, political and economic uncertainty, high rents and cautious summer spending, as well as strong growth in the world of online shopping, for their tribulations. Whatever the reason, the high street is not working in its current guise.

One possible solution is to embrace mixed-use, bringing residential back into the heart of towns and cities to try to pump life into the UK’s dwindling high streets.

But how realistic is the retail-to-resi dream?

Against the backdrop of a retail malaise, Britain is struggling to get to grips with a housing crisis. Currently, the country needs roughly 300,000 extra residential units a year to bridge the current shortfall.

Repurposing at least some of the swathes of empty shops into residential appears to make sense.

Lessons can be learned from our European counterparts in Amsterdam (pictured). Since the turn of the millennium, the Dutch capital has set its sights on untapped urban space to provide housing for its growing population, creating accommodation above and behind stores.

But making the retail-to-resi dream work requires more than just building homes where shops once stood.

“It’s becoming increasingly popular to look to residential uses to help reinvigorate and reinvent flagging retail spaces,” says Félicie Krikler, director at Assael Architecture. “Yet the reality is far more complex when put into practice. A straight retail-to-resi conversion risks replacing one monoculture with another, creating additional homes but failing to create a sense of location or place that will drive footfall and demand.

“To successfully revive retail with residential, there needs to be a considered drive towards more mixed and blended developments, where the existing retail uses are supplemented and supported by additional purpose-built homes, which would work particularly well on the high street. By doing this, the onus is on creating desirable, amenity-rich locations with high-quality housing options for all.”

Reviving the high street means bringing communities back into town centres. For the revival to happen, developers and planners must work to increase the variety of people who congregate at their locations. By developing a range of tenures, from build-to-rent to later living, new self-sustaining communities can be born, argues Savills development director Jonathan Lambert.

There needs to be a drive towards more blended developments

“Mixed-use developments are central to the rejuvenation of our high streets and town and city centres,” says Lambert. “They play a crucial role in diversifying land use and generating footfall during and after business hours, which in turn helps the retail and leisure sectors.

“The opportunity for delivering these developments at scale and changing the feel of a wider area is due to the range of complementary uses that can be delivered in parallel and alongside high-quality public realm.”

He adds: “Within the residential sector in particular, schemes are including a range of tenure types, which include open market sale, build-to-rent, affordable housing, student and retirement living, all close to amenity and public transport. This is in addition to commercial space and hotel/serviced apartments, which move certain areas of towns and cities away from single mono-use schemes and towards more vibrant communities.”

Redeveloping unoccupied retail space would complement the organic composition of Britain’s high streets and restore social activity. The cost of redeveloping would also be significantly less than building from scratch. By ‘plugging in’ communities, town centres would benefit from a desirable knock-on effect in growth to retail and local businesses.

Regenerating town centres means creating opportunities for new spaces and ventures that can be complemented by residential projects.

For the retail-to-resi dream to work, developers would also need to turn under-occupied spaces into flexible community areas that bring back dynamism and vibrancy, while providing interesting amenities to nearby housing.

Such community initiatives can already be found at Central Parade in Walthamstow, where the local council helped refurbish disused space to create a location where members of the community could work and socialise.

Retail-to-resi is not just a dream – it is a necessity. If the nation’s high streets are to survive the onslaught of rapid growth from online retail giants such as ASOS and Amazon, alongside slow wage growth and cautious consumers, they must adapt or die.