The results of the second Property Week / UKGBC Climate Crisis Perceptions Survey come at a critical juncture for the climate movement. With COP26 rapidly approaching and the world finally beginning to recover from the Covid-19 pandemic and the recession it caused, climate campaigners are shouting louder than ever that 2021 needs to be a year of action after all the rhetoric. 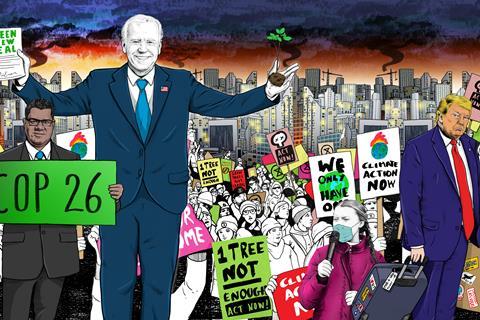 So, how do 2021’s survey results compare with 2020’s? Is the industry finally starting to walk the walk – or is it still just talking the talk?

The biggest change in this year’s survey, which was undertaken as Property Week and collaborating partner UKGBC kicked off the second year of our Climate Crisis Challenge campaign, is the sharp rise in the number of respondents, which is up 40% on last year.

A greater proportion are in senior positions this year, too, suggesting more top-down buy-in. Last year, 50.6% of respondents were at director level or higher whereas this year that figure is 60%.

This year’s survey also suggests the industry is finally looking to translate words into actions.

In 2020, 92% of respondents said tackling the climate crisis mattered to them personally, yet only 47% of respondents felt equipped to do so. Meanwhile, 40% did not think or know if they had a business strategy to tackle it.

This year, 94.5% of respondents say tackling the climate crisis matters to them personally, while the percentage who feel equipped to tackle the crisis has increased to 56%. The percentage who do not think or know if they have a strategy has fallen to 30%.

One reason for this change could be the need to attract talent. Some 85.6% of respondents say they want to work for organisations that recognise links between climate change and social justice and aim to create positive social value. Market forces are also at play. Just 9% disagree that there has been a shift in demand from occupiers towards net zero carbon buildings.

Meanwhile, 95% agree that there are commercial opportunities in becoming a solution to the climate crisis.

Another factor is, of course, Covid-19.

Asked what impact Covid-19 will have on the climate movement, 49.2% of respondents say they think it will accelerate positive change compared with 34.5% who think it will slow it down. Only 16.3% do not think it will have any impact.

“Climate and ecological crises have become much more tangible to people as a result of the pandemic,” she says. “There is recognition that big systemic risks hit hard and suddenly, and that the cost of mitigation has to be far lower than the cost of response once they hit.”

As well as urging respondents to reflect on the pandemic, this year’s survey asked them to look ahead by asking where they hoped the industry will have made the most progress by COP26. Some 45.7% believe it will be in commitments to net zero carbon; 31.9% think it will be in disclosing energy and carbon performance data (including embodied carbon); 13.8% say adopting circular economy principles; and 8.7% think the biggest progress will be in delivering positive social value.

The survey also revealed areas where improvement is needed. The percentage of those who can articulate what a net zero carbon building is has barely changed but has fallen slightly – from 68.5% last year to 68.3% – indicating a need to educate the industry.

There is also growing scepticism over the likely level of what UKGBC regards as vital government intervention. “While 61% of respondents strongly agreed last year that the government should regulate for higher environmental standards across all stages of the building cycle, only 38% strongly agreed that government would do so in 2021,” notes Hirigoyen. “This indicates some scepticism that government will regulate as it needs to. Recent U-turns on policies like the Green Homes Grant won’t have helped.”

However, in terms of industry attitudes, the climate agenda appears to be gaining traction.

Claudine Blamey, head of sustainability and digital strategy at Argent, one of our lead Climate Crisis Challenge partners, says: “It feels like there is consensus around the financial risk climate change presents and also that there is a lot more understanding of the business risk.”

Jessica Tomlinson, head of real estate for London at fellow lead challenge partner Barclays, agrees. “If 2019 was the year that the industry moved from rhetoric to action on climate change agendas then, despite the global pandemic, this continued,” she says.

“We expect to see more businesses put in place a climate crisis strategy with defined commitments and a clearer sense of action and purpose,” she says.

”Technological developments and increased know-how are also likely to help us move towards more sustainable development through the circular economy.”

David Jackson, head of national planning at lead partner Savills, is also optimistic. “In five years’ time, we would expect all companies to have a clear strategy for addressing the climate challenge,” he says.

“We will see not only positive investment in the most sustainable assets, but a repositioning of assets that do not meet new standards and are at risk of becoming stranded.

The scale of the challenge means that a response on an ‘all assets’ basis is required.”

Hirigoyen is also confident that things will have improved by 2026. “It was interesting to see the recent coverage of JLL’s new HQ in London following a long and difficult search for a net zero carbon office,” she says. “In five years’ time, that type of product should be much more widely available, and backed by credible forms of certification and verification which don’t exist at the moment.”

This bodes well for real estate becoming part of the solution to the climate crisis rather than part of the problem – but as this survey shows, there is still a long way to go.