Dogs in workplace give employers paws for thought

When working with occupiers to identify new accommodation options, a question that is increasingly asked, especially by US occupiers looking to expand in London, is: can we have dogs in the building? 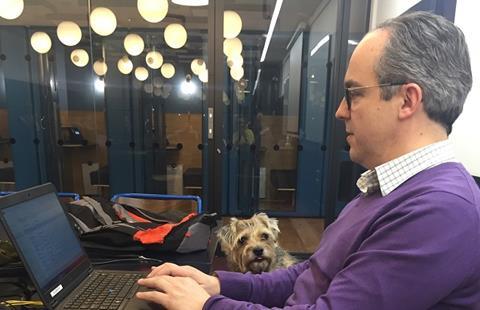 It’s widely perceived that offering staff the opportunity to bring their dogs to work is a tangible benefit. Stroking dogs has even been proved to lower blood pressure.

Google has long been known as a dog-friendly employer. In fact, it even has some on its staff list. However, we have yet to see it become commonplace in more traditional industries.

Proponents suggest that dogs in offices promote wellbeing and reduce stress. What’s more, offering employees the option of bringing their dogs to work will negate the cost of dog walkers, and this could make one employer more attractive than others.

Meanwhile, opponents are adamant that dogs in the workplace are distracting, a hindrance and a health and safety risk. They argue that this is a bridge too far in our quest to modernise the workplace and a mere fad led by ‘ever-needy millennials’.

Even if an organisation agrees on a dog-friendly policy, the hurdles in implementing and controlling it are numerous. Some landlords will be happy for dogs to be in their buildings, but many won’t. This can be because of historic leases not permitting livestock on the premises or because of building management issues. 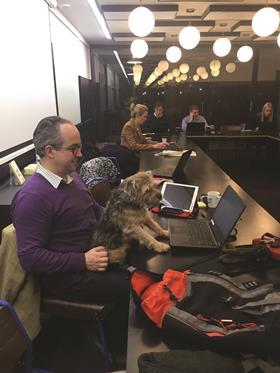 Bringing a dog to work raises questions that HR might never have thought they would have to deal with. Can everybody bring a dog every day? What about employees who are allergic to or scared of dogs? Is there a size limit – nothing bigger than a Labrador? What about fouling, aggressive behaviour and regular flea treatment? Do buildings need to start thinking about creating a doggy crèche and can a landlord charge for its use?

The list of questions is extensive, but there are many organisations that make it work regardless. There are companies that have a ‘three strikes and you’re out’ rule with regard to anti-social behaviour, as well as specific areas for dog owners to work and even official corporate dogs available for anyone to walk.

Just as with the introduction of dress-down days or remote working, there will be trial and error and employees will have to take a large part of the responsibility for its success.

As a commuter from Surrey with two stay-at-home dogs, I decided to trial a day working alongside one of my trusty companions. So I took my border terrier Midge to work with me. My own employer currently does not permit dogs so my team at the office decided to do some remote working and base ourselves at a WeWork centre.

It was genuinely a great day. Having to walk the two miles to the station, rather than using my motorbike, meant more exercise for us and we got to engage with the numerous admirers she acquired throughout the train, tube and bus journeys. It was a pleasant change from the usual miserable looks and gloom that commuting entails.

Throughout the day, it was nice to take her for a stroll outside every couple of hours to get some fresh air. She was a real ice breaker and I got talking to all sorts of people just going about my working day that usually wouldn’t even bat an eyelid. I never got the feeling that my 20 or so colleagues were annoyed, distracted or irritated by her. Rather, she was welcomed at all of the meetings I had booked in throughout the day. One client offered to have sausages brought in for her breakfast! 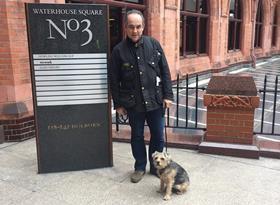 However, it did feel like Midge was one extra thing to have to think about and plan around.

Also, we didn’t meet any other dogs in the suite we were based in to see how she might have reacted. She has a particular mistrust of other terriers, so that may have been a godsend.

I will admit that diary management that day did require extra planning and it wouldn’t be suitable for me to take her to work every day. However, Midge and my colleagues really enjoyed the whole experience.

I am pro dogs at work, but it does need to be carefully administered and controlled, as once they are allowed in it will be very hard to reverse. Some sensible ground rules are definitely needed.

Andrew Barnes is head of tenant representation at JLL