A change of ways

Leeds United FC manager Marcelo Bielsa has racked up a glittering array of accolades over his illustrious career, including an Olympic Games gold medal. 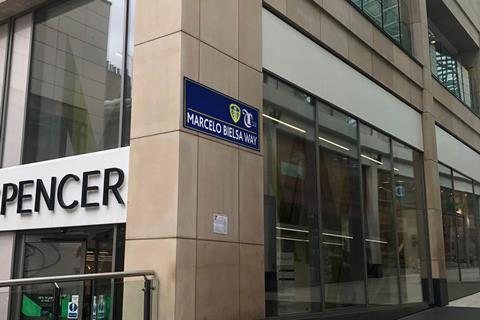 But turning a mid-table football team into Championship title winners in just two seasons surely ranks as his crowning achievement.

This week, to commemorate Bielsa’s Herculean feat, Trinity Leeds shopping centre renamed a street that runs through the scheme as ‘Marcelo Bielsa Way’.

It is also temporarily changing its name to ‘Trinity Leeds United‘ for the month of July to celebrate the club’s return to the Premier League.

“This is a fantastic moment for the city and we are delighted to be able to share in the celebrations as Leeds United return to the Premier League,” said David Maddison, centre director of Trinity Leeds United.

“He deserves all the plaudits and we are absolutely delighted to rename this street ‘Marcelo Bielsa Way’.”

United fans will no doubt look forward to ‘marching on together’ up the street when the new Premier League season begins.