Barratt Homes has announced plans to slash its direct carbon emissions by almost a third over the next few years. 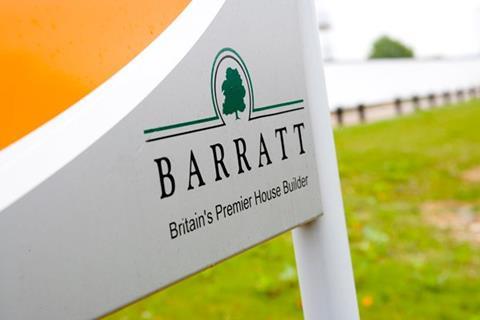 In a trading update this week, the company said it aimed to be the UK’s most sustainable housebuilder and revealed that its board had approved plans last week to cut emissions by 29% between the 2018 and 2025 financial years.

Barratt intends to hit the target by reducing the diesel used by generators on site, changing its vehicle usage policies and using energy more efficiently across its offices and sites.

The housebuilder said it was also taking steps to reduce carbon from its supply chain and in use carbon from its homes by utilising timber frames, “a low energy technology”, among other measures.

It said it hoped to reduce these indirect carbon emissions by 11% by 2030. The trading update added: “We are looking at how we can meet the Future Homes Standard and design homes that are not connected to the gas grid.”

Julie Hirigoyen, chief executive of the UK Green Building Council, said: “As the country’s largest housebuilder Barratt is taking a very positive step by being the first major housebuilder to publicly set science-based targets for reducing carbon emissions. It’s vital that companies take responsibility for their impacts and how they operate as businesses. We would like to see many more do it, building on the 30% of FTSE companies that have some form of science-based target.”

David Thomas, chief executive of Barratt Developments, added: “Setting ambitious emission reduction targets is vital if we are going to reduce our impact and safeguard our environment. We believe every business needs to take responsibility to tackle climate change which is why we are the first UK housebuilder to announce science-based targets in line with our commitment to be the country’s leading national sustainable housebuilder.”