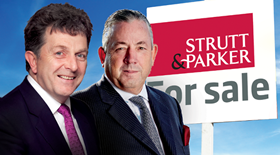 The deal will see BNP PRE’s UK business run by Strutts’ managing partner Andy Martin, despite Martin revealing he would be stepping down from a leading role earlier this year.

After more than a 12 months of on off talks, which were revealed by Property Week last year, all Strutt’s partners, BNP PRE’s UK board, and senior BNP PRE management in Paris signed the deal late last week. It is expected to complete in late September.

It appears Martin, who turns 61 in August, has decided to reverse his decision to retire from the business, after he told this magazine he was stepping down.

In February he said: “One item I can share with you is the need to discuss my successor, because this is my final year as senior partner.”​

BNP PRE, which is part of the Paris-listed banking giant BNP, had planned to make the deal public once it had informed staff tomorrow, but is now expected to make a statement after the markets close in France this evening.

According to the terms of the deal it is understood BNP PRE is taking on the entire Strutts business. Strutt’s residential, rural, development and planning teams will continue to operate under the Strutt’s brand, whilst the commercial arm of the business will operate under the BNP PRE brand.

Neither side would comment on whether the deal involved any payment to Strutts, or whether the deal was based on a debt for equity swap, with BNP PRE taking on Strutt’s debt and pension deficit in exchange for taking control of the business.

Rumours of the takeover, which creates an agency firm with combined revenues of around £180m, of Strutts first emerged in spring last year when the firm appointed boutique investment bank Evercore to reportedly conduct a review of the business and help to source funds for expansion.

In February, speculation mounted that a deal was on the cards when Martin said he was stepping down. BNP PRE began due diligence on the takeover of Strutts in April.

Strutts was formed in 1885 and is owned by its 53 equity partners. The takeover of the company follows a slowdown in its residential business, and the partnership, which dates back to 1885, reported a 35% plunge in pre-tax annual profit for the year to the end of April 2016.

BNP PRE’s European business accrued €700m (£626m) in revenue last year. The UK is its third-biggest market after France and Germany, generating 12% of revenue. Globally, BNP PRE employs 3,900 staff across 16 countries, with alliances in a further 20.​