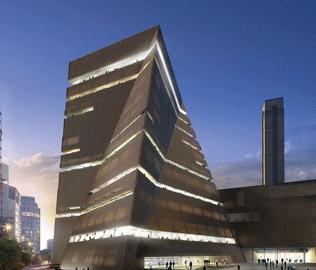 Tate Modern unveiled revised designs for its planned extension in London’s Southwark in July last year. The Herzog & de Meuron-designed extension will be built of brick, and will incorporate a perforated brick screen through which the 231,400 sq ft building will glow at night.

Johnson said: ‘The design is welcomed with the use of brick providing a different but successful approach to the ‘glass boxes’ of the 2008 approval. However, the matter of ‘active’ frontages on the southern elevation needs further examination as well as detailing relating to the junction between the existing and new buildings.

‘There are outstanding concern relating to access/equal opportunities. Further discussions are required to ensure that the building fully meets the principles of inclusive design.'

He said the application meets London Plan policies for transport and climate change.

The comments were made in a series of planning steering decisions, made by delegated authority by deputy mayor for policy and planning Simon Milton, which were published today.

A spokesperson for the Mayor said: 'The Mayor was highly supportive of the proposals for an extension at the Tate Modern, in particular its bold and imaginative design. He did raise valid issues in respect of accessibility which officers are seeking to resolve before it’s referred back to him by Southwark Council for a decision.'