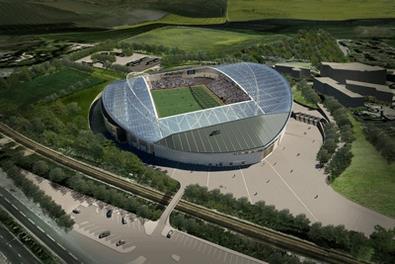 Developer The Community Stadium has signed a £60m-plus construction contract with Buckingham Group Construction for the development of a new stadium for Brighton & Hove Albion Football Club.

The 22,000 seat stadium, based on the outskirts of the city in Falmer, will be ready for the 2011 season. The site will include the stadium, car park, a bus and coach interchange and the widening of nearby roads.

It also includes significant community use requirements such as the development of a very large education space beneath the East Stand which is subject to extended negotiations with a local Further Education College. A further building is proposed, subject to planning, to provide a new construction training facility.

The deal also included the construction of bridges over Network Rail land and agreements for local infrastructure improvements around the site. The stadium will be virtually a 'car-free' development with improved public transport, including an on site bus terminal, to enable park and ride for match day attendance.

The signing of a contact marks the end of long development process which saw a 10 year battle to achieve planning permission for the stadium which will be the permanent home for the League One side.

The planning application went through two public enquiries and was finally approved by secretary of state for Communities and Local Government Hazel Blears.

Martin Perry, chief executive at Brighton & Hove Albion Football Club and the director of The Community Stadium with overall responsibility for the project, said: ‘This is quite a moment for the Football Club, we first identified the site in 1999 and fought for seven years to secure planning permission. At last our dream is beginning to turn into reality.’