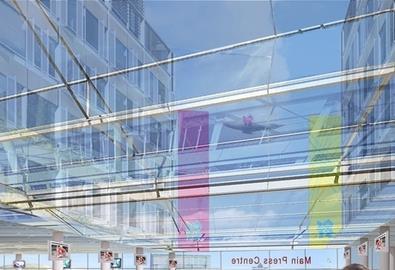 The government’s architecture watchdog has criticised the ‘extremely weak’ design of the media centre for the London 2012 Olympic Games .

The Commission for Architecture and the Built Environment (CABE) said it was ‘unable to support the Olympic Delivery Authority’s (ODA) proposed designs for the International Broadcast Centre and Main Press Centre which are located on the edge of the Olympic Park.

It said it has reviewed all of the key projects for the games and in the majority of proposals praised ‘the ODA’s determination to deliver good design and a strong legacy’.

However it said it had serious concerns over the quality of the architecture of the broadcast and press centre designs. Architect RPS designed the International Broadcast Centre and Allies and Morrison designed the Main Press Centre.

‘The design for the International Broadcast Centre shows a ‘paucity of imagination’ and the panel believes it could even blight the Olympic Legacy. More work is also needed to improve the ‘large monolithic block’ of the Main Press Centre,’ said CABE.

CABE also said that the site had originally been ‘conceived to operate in the legacy as a vibrant neighbourhood, the planning application shows that it will now operate under a business park model instead’.

It has asked the ODA to develop a new strategy to ‘secure the necessary architectural quality to attract investors and provide the competitive edge which a business park in this location needs’.

Paul Finch, chair of the London 2012 design review panel, said: ‘Unless there is a fundamental rethink, then people could be forgiven for wondering why sheds have been removed from the Lower Lea Valley in the name of high quality urban regeneration, only to be reinstated at a much larger scale. When we talk about poor architecture we are not just talking about style here.

'We mean identity and character, and scale and coherence, and the creation of a legacy which is appropriate to a site of this importance.’

A planning decision on the Broadcast and Media centre is expected to be made on 9th June. CABE said if planning authority does give the scheme approval, then it should be conditional approval upon improving the architectural quality of the scheme.