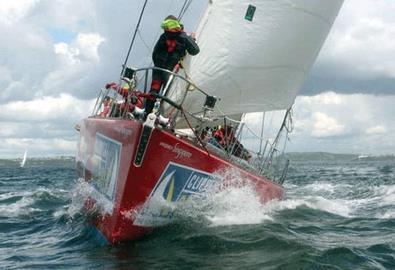 Sunday lunch time came and it was time to catch a train back down to Gosport for Part B training.

There was less sense of uncertainty this time, as I knew three of the people on the training and the chances were that at least one of them would be on my boat. Ali and Raeann from Blackadder along with Paul from Ariel during my Part A were all coming down.

As it turned out all three were on my boat (the 68 foot ex-Glasgow clipper) which was a lovely surprise. We also had two people who had just completed the Navigation & Meteorology course (and looked completely drained by it), two serving police officers, another healthcare professional and a rock climber from Oman.

Our skipper Pete and first mate Pete (not confusing at all – we called big Pete “Skippy” and little Pete “Joey”) outlined our aims for the week – we would be doing mainly day sails and would be running through multiple evolutions each day to help us perfect sail changes and other important tasks required to help sail the boat effectively during a race. We were also lined up for another examination, and the week would culminate in a race between the two boats.

Once again the opening day finished in the Clarence, a rather tatty pub that in my professional capacity I would describe as “in need of refreshment” if not “under-demolished”. That said it is the centre of Clipper training, with the staff and regulars taking all the influx of trainees into the hearts and making us extremely welcome.

Monday morning was again a slow start, with the final walkthrough of the boat and setting up the rigging for our first sail. I was pleased it was a slow start as I was trying to recover from a very poor nights sleep – it seemed we had a number of contenders for “snorer of the year” on the boat.

The main differences between the 60 footers and the 68 footers was a significantly larger internal lounge area, 8 foot higher masts and therefore much heavier sails, the snake pit and of course the infamous coffee grinders. Coffee Grinders are the main winches that can be worked by two people at the same time in comfort (rather than using a two person winch handle). The snake pit is an area just astern of the mast, where all of the 'ropes' run to, and with up to 9 halyards and sheets running directly into the area - it can descend into a complete mess of ropes unless it is tidied up constantly.

The key thing from my perspective was the size of the sails…with the additional 8 foot of height on the mast it meant that the sails were significantly larger and therefore heavier.

Skipper suggested that it would be a good job to 'sweat' the mainsail to the second spreader on the mast, and then teams of grinders should be standing by to finish off 'making the halyard'.

That was taken as a challenge and at the first attempt we managed to get the mainsail up to the third spreader which astounded the skipper and mate. We also did a “le mans” start, which was a race to raise the headsails from a rolling start. We were told that at least three of the starts in the RTW race are Le Mans starts and so it was a very important exercise.

We were also told we could expect to complete the start in between 5 -20 minutes on our first attempt, although by the end of the week we would hope to get between 2-3 minutes. I think everyone on board was ultra-competitive and we allocated jobs to the most suited people on board – our first attempt was just under 3 minutes – once again Skipper and Mate were stunned and we were all thrilled.

We went through a huge range of evolutions during the day, all changing positions to try and get the full details of the process understood by everyone – I felt quite over-whelmed by the detail, and although it was making more sense than during Part A I was seriously concerned that I was the only person who was not grasping everything.

We finished back in harbour at about 10pm, just in time for the first lecture of the week. I finally got to bed at 11.30pm, ready to be awoken at 6am.