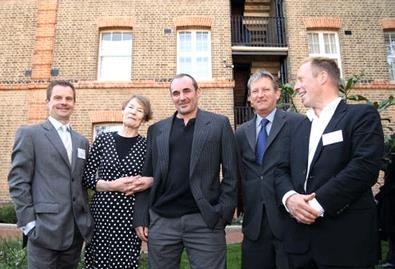 Glenda Jackson MP attended the completion of a major refurbishment of two historic social housing buildings in her London constituency.

At 150-years old, Genesis Housing Group’s New Court in Hampstead is the second-oldest social housing development in the UK, and was once home to Boy George, Sid Vicious and Johnny Rotten.

The 40 Grade II listed apartments were designed by architects Stock Woolstencroft and renovated by Durkan on behalf of Genesis. After work was completed in 2007 they were shortlisted for a RICS award (Building and Conservation).

The picture shows, from left to right: