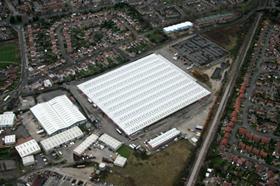 The park was acquired in a weak capital market environment with a view to capitalising on the potential to increase existing site massing and the expectation of improving occupational fundamentals, GULF said. As part of the business plan, the partners developed a new 228,529 sq ft distribution unit for Aston Martin Lagonda, thereby introducing a high-calibre tenant and increasing the lease term across the park.

Barwood and JP Morgan also secured planning consent for a new Sainsbury’s foodstore, which is under construction and due to be delivered in March 2015, having been forward sold in a separate transaction during 2014.

The park is centrally situated within the M40 motorway region, offering access to the major UK hubs of London and Birmingham.

Griffen Capital, the London based asset manager of GULF, has bought in excess of £100m of assets for the fund since its inception in July 2014 and continues its aggressive acquisition strategy in the industrial, logistics and distribution sector.