London is the most dynamic global city due to its strong economic fundamentals, high levels of cross-border investment, positive outlook and reputation as a global tech hub, according to a report.‎ 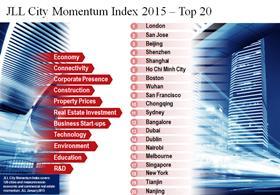 The 2015 report found that cities identified as tech hubs were the most dynamic, with Boston, San Jose and San Francisco also appearing alongside London in the top 20 list.

London topped the list because of high scores for education infrastructure, innovation capability, the number of high-tech companies and projected office and retail rental growth.

Ben Burston, director of UK research at JLL, said: “This ranking reflects London’s established status as the world’s leading destination for real estate investment, with the highest total trading volume and highest cross-border capital flows. It also recognises the capital’s rapid growing presence as a global tech hub, which is widening the occupier base in the office market. Educational infrastructure, innovation capability and a large number of high-tech firms will secure London’s position as the leading global city in the years to come.”

Other trends identified in the research include the buoyancy of Chinese cities, with seven appearing in the global top tier due to continued expansion of China’s domestic market and middle class population.

While continental European cities were once again absent from the top 20, cities in India and sub-Saharan Africa were for the first time represented in the top 20 due to the robust demand for office space from technology companies in Bangalore and expanding multinational corporations in Nairobi.