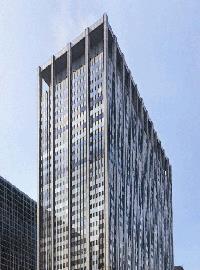 The fire sale of US property investor Harry Macklowe's assets continued today with the sale of a $1.5bn (£842m) office building in New York to US investor Paramount Group and German bank Allianz.

Macklowe, who started selling his New York assets before the summer in an effort to stave off his creditors, has sold the 1.8m sq ft office at 1301 Avenue of the Americas to Paramount and Allianz in a deal which sees the former take a 75% stake in the equity of the property and the latter, a 25% stake.

Ronald Weidner, chief investment officer at Allianz Real Estate, said: ‘With this investment we are continuing the diversification of our real estate portfolio on a global basis.

'With the acquisition of 1301 Avenue of the Americas, we followed our strategy and have invested in one of the world’s most attractive markets.’

The 45-storey property was built in 1963 and is occupied by tenants including Dewey & Le Boeuf, Calyon, Lehman Brothers and Dresdner Kleinwort.

Other properties sold by Macklowe included the General Motors Building, which was sold to a consortium of US property company, Boston Properties and a partnership between Goldman Sachs and Merass Capital, a Dubai-based private equity firm, for $2.8bn (£1.57bn) in June.