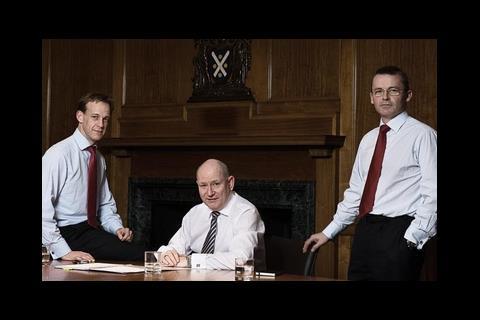 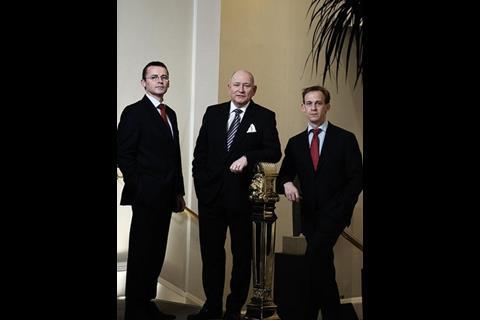 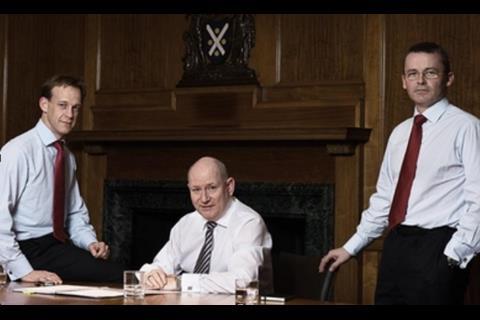 Bank of Scotland Corporate’s big guns are determined to stand by property throughout its cycles.

Who’d be a banker?

The credit crunch, the Northern Rock debacle and Société Générale’s rogue trader, Jérôme Kerviel, have conspired to make bankers as popular as politicians – and in the property sector that is if you can find one. Many property lenders have shut up shop, especially those that sold their loans in the now closed commercial mortgage-backed security market.

But, high up on the Mound in Edinburgh’s old town are a team of property bankers who are very much in business. Led by a 52-year-old man from a Dumbarton working class background, HBOS’s corporate arm, Bank of Scotland Corporate, is pressing on with its ‘through-the-cycle’ strategy, determined not to be thrown off track by a property downturn and a global credit crunch.

‘Our job is to ensure that we make money as value players at all points in the cycle, not just the up point or the down point,’ says the man from Dumbarton, Peter Cummings.

‘Our job is to read the cycles properly and to align with the right people, so that if we get into trouble, they can get us out of it. It is also to make sure they are fully funded so they can capitalise on opportunities in this part of the market.’

Aligning with the right people is something that sets Bank of Scotland Corporate apart from the herd of property bankers. Back in 2000 it revolutionised property lending when it created what he calls integrated finance, providing not just debt but also equity to ‘best-in-class’ property entrepreneurs.

Cummings, who says he gained his love of property in the 1990s recession, when he was in charge of corporate recovery at the bank, is undoubtedly one of the key wealth creators in UK property, responsible for making wealthy and successful entrepreneurs, such as Nick Leslau, Jamie Ritblat, Mark Steinberg, Elliott Bernerd and Bruce Ritchie, even wealthier and even more successful.

Outside the property sector he helped finance Sir Philip Green’s £850m acquisition of Arcadia retaining an 8% stake and the Barclay brothers’ £840m takeover of Littlewoods.

So successful has Cummings’ strategy been that the six divisions within his £100bn corporate empire – of which property lending and property joint ventures are two produced 40% of HBOS’s profits in the first half of last year, up from 20% in 2001. Corporate’s profits were £1.24bn in the six months to 30 June, beating the retail division’s profits of £1.04bn. Full-year profits for 2007 are expected to be announced on 27 February analysts are forecasting £5.7bn.

Bank of Scotland Corporate still provides traditional loans to property investors through Nick Robinson’s real estate team and, with a loan book of £30bn, it is either the largest or second-largest lender to UK real estate.

Its great rival, the Royal Bank of Scotland, is up there with it in terms of size, but does not reveal the size of its property loan book.

But it is the debt and equity financing, carried out by John Moran’s £18bn joint venture team, that has really put the bank on the map. In just seven years, Moran’s team has invested in the UK more than £10bn in 125 deals with more than 70 partners.

Having just enjoyed a spectacular five-year bull run in UK property that ended last year, investors might forget that, when Cummings embarked on his bold new strategy, property was anything but popular, spurned for being old-fashioned in the shortlived dot.com boom.

‘The integrated finance model started in 2000 when we decided that there were significant defensive positions we could take when the world was moving away from what was traditionally our arena of private equity and straight real estate,’ Cummings recalls. ‘Real estate was then an orphan sector. Banks had memories of the recession and so did we.

‘We believed there was significant undervalue in three sectors in particular: housebuilding, real estate and hotels. And because of their defensive nature and asset backing, we proposed to our board that we should take equity in these sectors. As a bank we were fundamentally about value protection.

‘We were blending that value protection with real value creation. How we did that was by understanding the sectors, but most importantly aligning ourselves with the “best-in-class” operators. And we avoided institutional partners and went towards entrepreneurial partners.’

Cummings initially targeted companies that were undervalued or undercapitalised. In the first 18 months he took several public companies private. In the real estate sector there was Moorfield, Compco, Chelsfield and Green Property; in housebuilding there was Cala, Linden and Wainhomes; and in hotels there was Macdonald Hotels and a tie-up with Sir Rocco Forte’s RF Hotels.

‘We became aligned with some pretty key partners who are still with us today,’ says Cummings. ‘Our ethos is one of partnership.

We don’t have the arrogance to act as principals and we would never compete with our clients.

‘What we bring to the party is the ability to scale up some outstanding property people, bringing our financial muscle and financial engineering and insight into the market.’

Taking such a big punt on sectors that were derided in the dot.com boom as ‘old economy’ was brave and, ultimately, perfectly timed.

‘You have to give us credit for that,’ says Cummings. ‘The people we surrounded ourselves with we thought long and hard about. In the joint venture business, that type of arrangement is not for everyone.

‘We were like the bridegroom, we did the asking. A lot of people came through our door. This is about equity, and that’s pretty precious. We were quite clear who we wanted to deal with and who we didn’t.’

Cummings says there is no strict formula to the way the joint ventures are structured.

‘It depends on the asset class and on what the business needs,’ he explains. ‘Property lending is a cashflow business, it’s not a loan-to-value business. Our models are constructed from a cashflow perspective. They are not constructed around what security we’ve got. Particularly in the arena of value creation how you create value in property is about cashflow.

So, what type of person is he looking for, what makes an entrepreneur?

‘There are different personalities but they often display the same traits,’ Cummings replies. ‘The traits for me that define entrepreneurialism are that they have the ability to spot the opportunity. Second, they have within them really outstanding risk assessment processes. Third, they surround themselves with the correct people. Fourth, they have the ability to execute both at the entry and exit points.

Leslau is making the most of Cummings’ ‘through-the-cycle’ strategy, spending hundreds of millions of pounds already this year in the less competitive and cheaper-priced UK market. Bank of Scotland Corporate invests in Leslau’s Prestbury fund alongside another equity provider, Sir Tom Hunter’s West Coast Capital. The bank has done a lot of business with Hunter, working in partnership with him in corporate deals such as housebuilder Crest Nicholson, rather than providing equity. As Scotland’s richest man Hunter is not in desperate need of the bank’s equity.

Hunter has also taken the bank into new territories. After five years focusing on housebuilding, traditional property and hotels, Hunter and the bank moved into the property-backed area of garden centres, together buying Wyevale and Blooms of Bressingham.

The bank also went into the nursing home sector, backing the £280m buyout of Ashbourne Healthcare in 2005.

The 200-strong joint ventures team, which John Moran took control of last September, has also expanded geographically, and Moran feels the division’s next five years will be characterised by ‘geographical evolution’.

Nick Leslau is outstanding as a property individual. He’s clear in terms of opportunity

‘We courted him,’ says Moran. ‘This is the start of a big push to extend our joint venture business into Europe.’

Moran works closely with the real estate lending team, headed by managing director Nick Robinson. Like Moran, Robinson only took control of his division last year. An Englishman, he is extremely bright and originally planned to be an engineer. ‘My family are all engineers and geeks, so I was always committed to being an engineer,’ he says.

After leaving Cambridge University, he went to Harvard Business School, then to management consultant McKinsey, where he worked in a financial services unit.

‘It was a tough time as insolvencies were growing, impairment charges were going up 50% a year and the analysts were beating us up because they thought we didn’t understand risk,’ says Robinson.

‘I was also looking after the balance sheet, which was of limited interest externally until Northern Rock came along.’

In the middle of last year Cummings approached him to move to the corporate side and take charge of the £30bn real estate lending division. Robinson says the move was a ‘sideways’ one, but ‘from a career perspective it was a fantastic opportunity’.

He looks after 700 people in London, where there are two offices, in Scotland, where there are three, and in the south of England, the Midlands and the north. They provide debt to investors, developers and housebuilders. There are 12,000 customers, but, as Robinson says, they are ‘massively skewed’.

‘We have a lot at the low end 82% deliver 13% of returns’. Like Moran’s joint ventures business, the focus, he says, is on entrepreneurs. ‘Of the top 100 in the property rich list we have 20% and of the top six private housebuilders we have five,’ he says.

Two of Robinson’s clients are Kevin McCabe, now working for his own company, Scarborough, and Australian fund manager Valad – and who is also one of the judges in the Bank of Scotland and Property Week’s £30m Search for Property Entrepreneurs and Gladedale’s Remo Dipre. The pair have made extensive use of the bank’s debt.

The credit crunch and the downturn in the UK property market have inevitably had an effect on Robinson’s team.

‘Things have definitely slowed down but not nearly as much as data suggests because we’re still lending and the people we back tend to be the entrepreneurs who are now buying,’ says Robinson.

‘The plans we put together last August are still the same. We still want to lend. Costs have gone up for us and structuring has changed, but otherwise we’re the same.’

The message is clear: Bank of Scotland Corporate is a through-the-cycle investor and lender. As Cummings says: ‘We see opportunities. Our joint venture partners are fully funded. I have been wishing for the days when we could talk about real estate, not financial engineering, and I think those days are now here.

‘Now is the time for the people who know about real estate to create value and capitalise on the opportunities.'