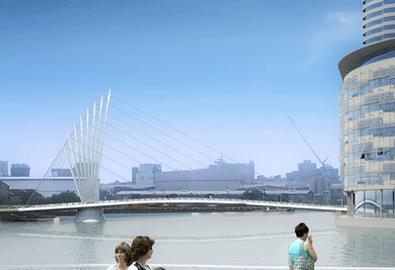 Engineering and environmental consultants Gifford and Wilkinson Eyre Architects have designed a new footbridge for the MediaCityUK development at The Quays in Manchester.

Planning permission has been submitted for the bridge which will link MediaCityUK on the North Quay in Salford with developments on the South Quay in Trafford, including the Imperial War Museum North.

The teams hope that the cable-stayed bridge, which is designed to move to allow ships to continue to sail along the Ship Canal, will be a highly visible landmark when it’s built.

The BBC will move five departments to the development from 2011 including Sport and Radio 5 Live.