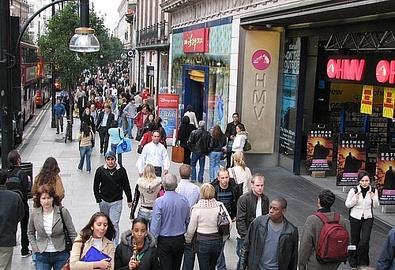 The West End also outperformed the rest of the UK where footflow was flat at -0.3% year-on-year. Easter Monday reported a significant increase with foot flow up 10.5% year-on-year.

Foot flow does not record how much is being spent by shoppers, merely how many actually visited the area.

'Retailers reported good sales in foods, fashions and home improvement items from both the domestic and international shoppers who hit the high street in force for the first time this year.

‘The continued weakness of the pound against the Euro and the dollar has also meant that more domestic shoppers stayed at home for the Easter weekend.

'The West End also benefited from the spending habits of international shoppers, particularly the French, Italians and Americans who continue to take advantage of the favourable exchange rates.’

Christine Watts, communications director at Selfridges, said: ‘It was chocolate heaven this Easter, with sales across all our lines up 80% on last year. Fantastic new product ranges from Willie Harcourt-Cooze, Melt and all our chocolatiers and confectionery brands are clearly encouraging customers to indulge.

'And, more than ever before, our international customers are joining the British in shopping for edible treats, not just the handbags and luxury accessories they continue to favour.’