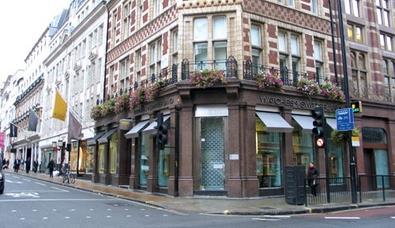 Private company buys in London’s most pricey shopping street at 3.8%

Ukrainian investors have bought a building on one London’s most exclusive shopping streets, Old Bond Street, in the heart of London’s Mayfair, at a net initial yield of less than 4%.

A private Ukrainian company has bought 1 Old Bond Street, which has two shops let to Watches of Switzerland and Ralph Lauren, for around £14m.

The company is understood to have exchanged contracts with Scottish Widows Investment Partnership for the building last week, paying cash.

Watches of Switzerland pays a zone A rent of £400 in one of the units and £425 in the other. The cheaper unit has an outstanding rent review and the price factors in an expected increase in rent.

Old Bond Street is the most expensive location in London to rent a shop – Colliers CRE’s central London retail market overview for autumn 2008 found zone A rents on the street are £725.

It is also understood that designer Dolce & Gabana is close to securing a store at a rent equivalent to almost £800 zone A, reflecting the strong tenant demand for the street. It is thought CB Richard Ellis is advising.

The investment deal shows that, despite the global economic turmoil, there is still demand from cash-rich foreign investors for UK property in prime locations.

Overseas investors spent around £6bn in UK property for the first nine months of the year, research from Jones Lang LaSalle shows.

The figure accounts for 54% of commercial property investment in the country. UK private investors (£1.2bn) and unlisted UK property companies (£4bn) make up the rest.

The building at 1 Old Bond Street also has two floors of offices let to Ralph Lauren and a top-floor flat. Lewis Ellis acted for the vendor.

Among other recent Mayfair sales at sub-4% yields was Hermes’ 7 Clifford Street, sold to a Russian investor for £70m. Jones Lang Lasalle acted for Hermes.