US agrees to sell London embassy to Qatari Diar 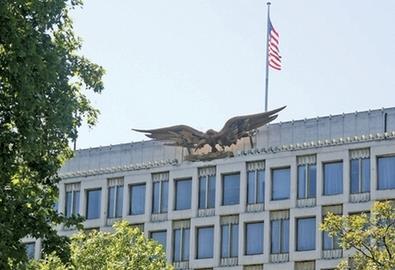 The US state department has entered into an agreement to sell its embassy in Grosvenor Square, London to Qatari Diar.

Qatari Diar has signed the contract with US ambassador to the UK Louis Susman to buy the building. It is thought that Elliott Bernerd and Sir Stuart Lipton's Chelsfield Partners is working with Qatari Diar on the deal.

The money raised from the sale is expected to fund the development of the new embassy in Nine Elms.

In a statement, the US said: “With the signing of this contract the United States takes another step towards relocating to a new state-of-the-art embassy which will enhance the urban fabric of London and demonstrate exceptional American architecture. The construction of the new U.S. Embassy in the Nine Elms area of Wandsworth will provide a modern, open and secure American diplomatic facility in London.”

In early 2010, the US is set to announce a winner of the design competition for the new US Embassy. It hopes to begin construction in 2012 or 2013 to complete the project by 2016 or 2017. The US will continue to occupy the Grosvenor Square building until the relocation is complete.

The agreement of the deal follows the Department for Culture, Media and Sport's decision around two weeks ago to give the embassy in Grosvenor Square grade II listed status. The US Embassy was designed by Finnish American architect Eero Saarinen.

Cushman & Wakefield advised the US.