Micro-living specialist Inspired Asset Management has struck its debut co-living market deal with the purchase of Telecom House in Wolverhampton. 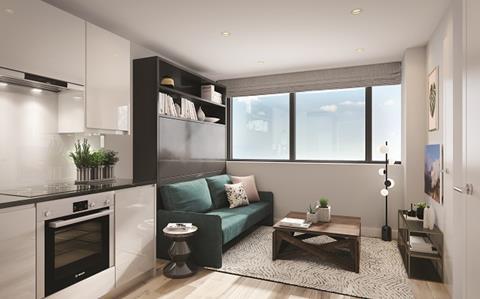 The six-storey former office building will be converted into 294 self-contained studio flats for rent with communal areas and has a GDV of £28.5m.

The apartments, ranging in size from 172 sq ft to 279 sq ft, will have a living and sleeping space plus a kitchenette and bathroom. Construction is set to start later this year with completion expected in 2020.

Inspired Asset Management chief executive Martin Skinner said: “As an investor in The Collective, I’ve had a lot of experience in co-living, but this is the first project for Inspired, as we’ve previously focused on house and flat shares and micro-apartment schemes. As with other co-living schemes, residents will be able to enjoy community living with shared social spaces.

“With so much investment planned for Wolverhampton and geographically being in the centre of the country, it is becoming an increasingly attractive location for businesses and a draw for young professionals working in a variety of different sectors. The city’s growth is supported by a proactive council and planning team, who always respond to us swiftly and approved our application.”

Skinner’s past experience in co-living includes a role as non-executive chairman at The Collective and supporting the British Property Federation to interpret its recently published definitions for micro-living.

The new Inspired scheme will sit alongside £3.7bn of regeneration currently planned for Wolverhampton underpinned by the £132m Wolverhampton Interchange scheme which will provide new office, leisure and retail for the city.