AXA Real Estate Investment Managers has set out its plans for a 220,000 sq ft mixed-use scheme across four buildings on the site of the former Harper Collins headquarters in Hammersmith.

The fund bought 77 Fulham Palace Road for more than £80m last year and will set about redeveloping the site into an urban campus named Assembly London.

Phase one of the project comprises the development of two new TP Bennett-designed buildings, The Foundry and 1 Smith’s Square, which between them will deliver 150,000 sq ft of new office space and 20,000 sq ft of retail and restaurant space. 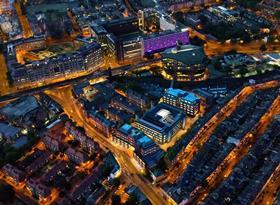 Phase one also includes the re-landscaping of the public realm led by a firm whose past projects include London’s Olympic Park. Both buildings will offer accommodation from 5,000 sq ft upwards, with floorplates at The Foundry of over 20,000 sq ft.

Office developer Bell Hammer has been instructed as development manager and will oversee the construction of The Foundry which is due to commence this month, following the recent grant of planning permission, with completion expected by mid-2016.

AXA Real Estate said it was in advanced discussions with an international TV and media production and distribution business regarding a pre-let of around 30,000 sq ft.

Harry Badham, head of UK development at AXA Real Estate, said: “The rebirth of this district as Assembly London will provide one of the best and most interesting working environments in central London. The growth of rents in many central London locations have begun to price out occupiers, and we believe many of these businesses will start to look for new locations where they can find value, whilst still wanting accessibility for staff and a great working environment.

“We believe that Assembly London, with its extensive landscaping, modern and varied office spaces together with a range of retail, restaurants and amenities, provides a highly appealing option, at just 15 minutes from the core West End.”

Knight Frank and CBRE have been appointed leasing agents on the office scheme, while the restaurant and retail spaces are being marketed by Bruce Gillingham Pollard.