Members of the property industry literally scaled new heights last week as leading figures turned into human spidermen and women for the day to descend the exterior of 22 Bishopsgate to raise money for charity. 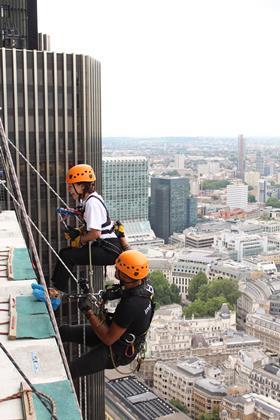 The daredevils were taking part in an abseiling event organised by the Lord Mayor of the City of London to raise funds for OnSide Youth Zones, Place2Be and the Samaritans.

The mayor was joined by 30 volunteers who abseiled more than 150m down the building’s facade from the new workplace space Twentytwo, located on level 35.

“Credit to the brave people who conquered their fears,” said Lord Mayor Alderman Charles Bowman, following his descent. “No doubt it was as daunting for them as it was for me, hanging over the edge at the top. But we made it and, most importantly, the generous amount of money donated will make a real difference to helping Londoners in need.”

The event raised £150,000 for charity, a sum almost as dizzying as the view that the participants got to ‘enjoy’ on their way down.