If you dream of being whisked away by Hugh Grant and/or Julia Roberts, and have a couple of million quid to spare, then a swanky resi scheme in W11 may be right up your street. 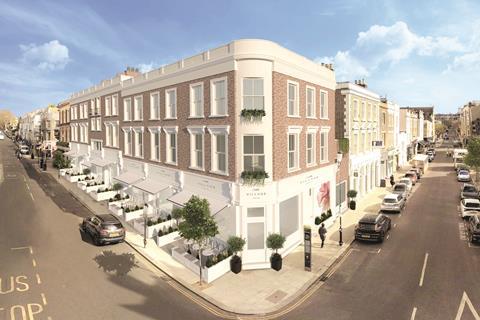 A parade of shops on a Victorian terrace featured in the 1999 romcom Notting Hill is being transformed into luxury apartments with views of the famous blue door to Mr Grant’s flat from the film.

The £29m redevelopment, which was recently financed by specialist lender Atelier, will see the seven freehold properties, including a former hardware store on Westbourne Park Road that appeared as a backdrop in the movie, turned into seven apartments and a row of boutique shops. The flats, priced from £1.95m, will be available this autumn.

The scheme, named Kensington Park Corner, is in the desirable W11 London postcode where movie fans still make pilgrimages to this day.