What the industry learned from ‘record-breaking’ Expo Real

The halls of the Messe München were busier than ever for this year’s Expo Real despite the uncertain outlook for Europe’s real estate industry. 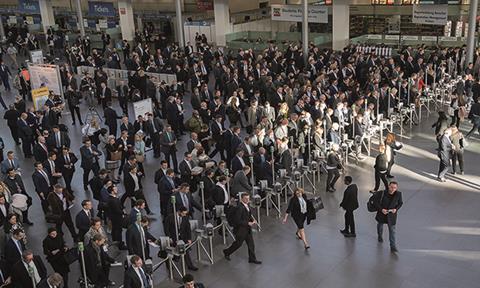 Expo Real was held at the Messe München

Exhibitor numbers were up 13% on last year to 2,003 and delegate numbers rose by 6.1% to 41,500, breaking all previous records, according to the organisers. Here Property Week rounds up the key takeaways:

Germany has been one of Europe’s hottest real estate markets this year. Investment volumes in the country overtook those in the UK in the first half of 2017, increasing by 34% year on year to €33bn (£30bn), according to Colliers International. That momentum looks unlikely to slow significantly.

A survey of German institutional investors with more than €60bn of assets under management, which was published during Expo by Universal-Investment showed their allocations to real estate were continuing to increase. The survey also found they planned to invest a larger proportion of their funds in Germany and the rest of Europe, and scale back investments in Asia-Pacific.

Increasing investment volumes in Germany’s biggest cities have put downward pressure on yields. Similarly, yields have tightened in Paris as a result of an uptick in investment and a stronger occupier market.

James Hammond, who leads CBRE’s investment team in the West End, said yield compression in Europe’s other top cities meant London represented increasingly good value for foreign investors, especially given the fall in the value of the pound. This was one of “many reasons to be cheerful” about the state of the London market despite Brexit and current concerns about the high volume of stock on sale, he said.

As for fears of oversupply linked to the high number of proposed new developments in London, Hammond said one of the positive effects of Brexit was likely to be that many of these schemes would not actually materialise.

Investment managers are finding it easier to raise money than to invest it, especially for core/core-plus and long-income strategies. Continued low interest rates mean that investors are hungrier than ever for sources of secure income. However, some managers complained that they were finding it increasingly hard to find the right investments at the right price amid fierce competition for assets.

Appetite for alternatives is showing no signs of slowing as managers seek out new sources of income. The day before Expo got under way, AXA Investment Managers - Real Assets announced it was entering the UK’s retirement living market with the acquisition of Retirement Villages Group. Its European head of transactions, Laurent Jacquemin, said the deal reflected AXA’s increasing focus on alternatives as demonstrated by its healthcare investments in Germany, Finland and Italy in recent years and its entry last month into the European student housing market with the purchase of a portfolio of 9,309 beds in Spain in a joint venture with Greystar.

Two-thirds of lenders surveyed by Cushman & Wakefield for its EMEA Lending Trends report said they expected to grow their loan books over the next six months. However, in the UK, European lenders are finding it harder to secure new lending opportunities than they are elsewhere because the big deals that have dominated the investment market are being done by Far Eastern investors who tend to use their own domestic banks.

As for loan pricing, strong competition between banks is keeping margins low, especially in Germany. In Frankfurt, Cushman & Wakefield estimated that average margins had dropped 31bps in the past six months to 195bps (versus 242bps across EMEA and 249bps in London).